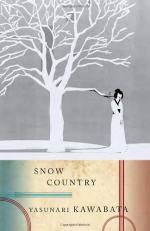 Yasunari Kawabata
This Study Guide consists of approximately 29 pages of chapter summaries, quotes, character analysis, themes, and more - everything you need to sharpen your knowledge of Snow Country.

This detailed literature summary also contains Topics for Discussion and a Free Quiz on Snow Country by Yasunari Kawabata.

The story opens with a man named Shimamura on a train bound for a resort town in the snow country of Japan. Shimamura is taken by the girl's voice, which he says rings out clearly. The woman is accompanied by an ill gentleman. The man's name is Yukio and he is the son of a music teacher in the village where Shimamura is bound. The woman's name, he will later learn, is Yoko.

Shimamura is headed to a hot spring resort town where he hopes to see a geisha he met on a previous trip. Her name is Komako and she is not yet a licensed geisha when he first meets her. He is entranced with her cleanliness but decides he would rather simply remain friends with her, looking ahead to the possibility of future visits to the town with his family. However, he is not interested in another geisha presented to him for his sexual needs and eventually becomes involved with Komako.

Their relationship is complicated and filled with emotional upheaval on the part of Komako. Shimamura feels she is becoming too deeply involved with him but seems unable to stop it, returning a third time to be with her. Komako is often drunk, tells Shimamura to leave, then to stay, begs him to be with her, declines to lie with him, agrees to bathe with him and later rushes off home. The tumultuous relationship seems somewhat unusual as the traditional role of the geisha is to attend a man's needs without emotional entanglements. Shimamura seems to put up with the moodiness and occasional anger as a matter of course.

Komako lives with a music teacher, the mother of the man Yukio who was traveling on the train with Shimamura. The woman accompanying Yukio, Yoko, remains to nurse him until his death, then goes to work at the inn where Shimamura lodges. Komako and Yoko do not like each other though the exact nature of their relationship is never explained. Shimamura hears from a masseuse that Yukio and Komako were engaged before his illness and that she took on the duties of the geisha to help pay doctor bills. Komako denies this but Shimamura seems skeptical. He says that it seems possible that Yoko is Yukio's new lover and that jealousy has prompted the dislike between the two women.

Yukio dies as does his mother and Yoko and Komako are no longer living in the same house when Shimamura returns for a third visit. Yoko tells Shimamura that she wants to return with him to Tokyo but is later killed in a fire. Komako says she believes Yoko will go insane but does not explain why she has come to that conclusion. When there is a major warehouse fire, Komako and Shimamura rush to the scene where they find that Yoko is a victim. Komako rushes to the woman's side, telling others to stay away because "the girl is insane."

More summaries and resources for teaching or studying Snow Country.