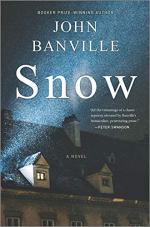 John Banville
This Study Guide consists of approximately 34 pages of chapter summaries, quotes, character analysis, themes, and more - everything you need to sharpen your knowledge of Snow.

Ballyglass is a small town in Ireland. It is the primary setting of the novel. After a Catholic priest is murdered in Ballyglass, Detective Inspector St. John Strafford is sent from Dublin to investigate. Strafford finds very little concrete evidence, and the Catholic Church attempts to suppress the investigation, but Strafford remains determined. Over the course of the investigation, he meets and converses with various locals.

Ballyglass House is the largest residence in Ballyglass. It is owned by the Osbornes, a wealthy Protestant family. Tom Lawless’ body is found in the house’s library, after Lawless was apparently stabbed to death. Strafford finds no signs of forced entry in the house, so the most likely suspects are the four members of the Osborne family who currently reside there.

Dublin is the capital of Ireland, as well as its most populous city. Strafford generally lives and...

More summaries and resources for teaching or studying Snow: A Novel.