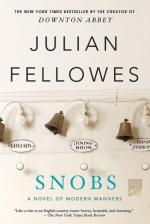 This detailed literature summary also contains Quotes and a Free Quiz on Snobs by Julian Fellowes.

Snobs is a novel about Edith Lavery, a young English woman from a middle-class background who meets and marries an upper-class Earl, Charles Broughton. Although she imagines that her new wealth and position will make her happy, Edith soon finds she is not fully accepted by Charles' upper-class friends and family, particularly Charles' imperious mother, Lady Uckfield. She leaves behind her active social life in London to live with Charles and his parents at their country estate, where she becomes bored and unhappy. When an attractive actor named Simon comes to the estate as part of the cast of a film, she begins having an affair with him, eventually leaving Charles and moving to London with Simon, who has left his wife, as well. Although happy for a short time, Edith finds she does not fit in with his group of friends, who seem only interested in her because of the scandal she has caused. After six months with Simon, she finds she is pregnant. Forced to take stock of her life and learning that Charles still loves her, Edith returns to him despite the efforts of his mother to keep her away. She returns to live in the country, has the child, and later another. She is never fully accepted by Charles' mother, and she still does not have the glamorous carefree life she imagines the upper class enjoys, but she finds she is content.

Snobs is narrated by an unnamed character who is from an upper-class background and has become an actor. Inhabiting both of these exclusive worlds, he trains a keen eye on the behavior of the "snobs," unveiling the motivations behind their apparent snobbishness, and suggesting that their apparent belief in their own superiority is really a result of not knowing any other way to behave. The narrator knows the unspoken meaning behind the various forms of politeness shown by the upper class and reveals them to the reader. As someone who is successfully established in both the upper- and upper-middle classes the narrator provides the other characters with a conduit between the two, facilitating introductions and acting as go-between. He first meets Edith through mutual friends David and Isabel, an upper-middle-class couple who live near the Broughton estate. While visiting the estate as part of a public tour, they run into Charles Broughton, whom the narrator knows slightly. He introduces Edith to Charles, and when the two of them meet again at a social event Charles invites Edith to dinner, beginning their courtship. As Edith becomes more involved with Charles, David and Isabel, who would like to belong to Charles' social set, try to invite themselves to events at the estate. They are eventually included when Charles' parents throw a large dinner party to announce the engagement of Charles and Edith. The narrator is also unwittingly responsible for Edith's affair when he arranges for Simon to attend a dinner at the Broughton estate where he charms Edith.

The novel takes place in the 1990s, when social mobility has become more common in Great Britain. Some people from the middle class who have become very wealthy aspire to be thought of as belonging to the exclusive upper class. Although they are able to adopt a similar lifestyle, attend many of the same social events and marry into the exclusive upper class, they are still looked on as outsiders who do not truly belong.