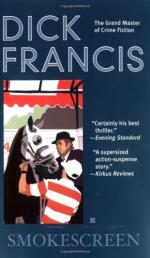 At the beginning of the novel, Link is filming a movie in which he is handcuffed to the steering wheel of a sports car known as a Special.

Link hires, or rents, a car in order to drive to Kruger Park with Evan and Conrad. Link wakes up his third morning in the park to find himself handcuffed to the steering wheel, much like his character in Man in a Car.

While handcuffed in his hired car, Link writes out his accusation again Danilo for his murder. This is later used to both convince friends of Danilo's guilt and to lure Danilo back into Kruger Park.

Nerissa, Link's old friend, is dying of Hodgkin's Disease. Nerissa has created a will giving all her friends a gift and leaving the bulk of her money, after estate duty, to her nephew. It is...