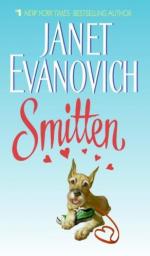 Janet Evanovich
This Study Guide consists of approximately 27 pages of chapter summaries, quotes, character analysis, themes, and more - everything you need to sharpen your knowledge of Smitten.

This detailed literature summary also contains Topics for Discussion and a Free Quiz on Smitten by Janet Evanovich.

In this example of the "popular romance" genre of novel writing, struggling divorced mother of two, Lizabeth Kane, talks her way into a job with hunky contractor Matt Hallahan. As a sexually charged, emotionally intense and comic romance develops, the narrative explores themes relating to the relationships between past and present, and parents and children.

The narrative begins with the first meeting of the two central characters. Determined divorcee Lizabeth uses every argument at her disposal to convince reluctant construction-site boss Matt that she deserves an entry-level job as a laborer. She is, however, unaware that she doesn't really need to be too persuasive - Matt is immediately attracted to her. In spite of his reluctance to mix business with pleasure, realizes that the only way he'll be able to pursue his intention to be with her is to hire her onto his team. For her part, Lizabeth is just as attracted as he is, but is determined to live an independent and fulfilled life after her divorce from her controlling, ambitious ex-husband. Her firm purpose and his desires win the day, and Lizabeth is soon working on what Matt believes to be suitably easy jobs painting wood trim.

Lizabeth's eccentric Aunt Elsie arrives to take care of Lizabeth's house and sons while she's working. The boys (Billy and Jason) are delighted by the new arrangement, particularly because Elsie lets them get away with just about anything. They become even more excited when Matt drives Lizabeth home - he's much more friendly and playful with them than their own father. For her part, Lizabeth finds it increasingly difficult to resist her attraction to her boss, particularly when he firmly resolves to protect her from what he believes to be the potentially dangerous naked man who appears repeatedly on her lawn (naked, that is, except for the bag over his head).

After he and Lizabeth get caught in a rainstorm as they're preparing to go home for the day, Matt detours to his town-house so he can change into some dry clothes. Lizabeth is shocked to discover that he garages his beloved Harley-Davidson motorcycle in his living room, that he keeps an exceedingly messy office, and that he lives like a slob. In the aftermath of these discoveries, she and Matt both remember that they're both soaking wet and both very cold. Lizabeth takes a shower, and when she emerges both she and Matt realize that their attraction is too strong to resist, and they make passionate love.

Their sexual relationship continues, in spite of Lizabeth's resistance to Matt's repeated suggestions that they establish something ongoing. Their professional relationship also continues, with Lizabeth taking over the administration of Matt's company. Finally, the visits of the flasher continue, and Matt and Lizabeth concoct a plan to get him to reveal his identity. Meanwhile, Lizabeth's ex-husband Paul arrives to take the boys for their annual vacation together. Lizabeth's sense of loneliness is so intense that she allows Matt more intimacy (emotional as well as physical) than she has in the past.

The boys return sooner than expected, their father having turned out to be a manipulative user (a sense that increases when it's revealed that the flasher is an acquaintance of Paul's that he manipulated into harassing Lizabeth). Lizabeth returns to her arms-length relationship with Matt, using her commitment to the boys as an excuse. It's only when the beloved family dog is run over by a car that Lizabeth realizes that Matt is also committed to her sons' well being, and as a result, her determination to keep him at a distance vanishes. She agrees to marry him; the dog recovers; the boys are happy; the ex-husband agrees to stay out of the new family's life, and everybody looks about to live happily ever after.

More summaries and resources for teaching or studying Smitten.