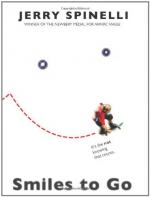 Jerry Spinelli
This Study Guide consists of approximately 46 pages of chapter summaries, quotes, character analysis, themes, and more - everything you need to sharpen your knowledge of Smiles to Go.

This detailed literature summary also contains Topics for Discussion and a Free Quiz on Smiles to Go by Jerry Spinelli.

This novel for young people is the story of teenage chess champion Will Tuppence, whose life is turned upside down by a series of seemingly random events that eventually trigger a greater acceptance and/or understanding of life, relationships, and himself. As it explores Will's friendships, his budding love life and his exasperation with his irritating little sister, the narrative also dramatizes issues related to the changeable nature of time and overcoming fear.

The novel begins with a short prologue in which Will, on a visit to an eccentric neighbor, learns about protons, a microscopic particle of matter which, the neighbor tells him, is the indestructible building block of all matter. The impressionable Will wonders whether, because he is matter, he too is indestructible, narration soon revealing that, over the years since, he has come to believe exactly that. One day, however, Will learns that protons are, in fact, finite and do come to an end. His belief that part of him IS indestructible is profoundly shaken, and he goes to school wondering what this news now means for his life, which up to that moment had been safe, secure, and predictable.

That sense of safety and security is due, in a significant way, to Will's relationship with his friends Mi Su and BT, with whom he has a regular Saturday night date to play Monopoly and eat pizza. That same sense of safety and security is further shaken when Will comes to realize he is beginning to have feelings for the playful, teasing Mi Su that go beyond friendship and, at the same time, feelings of resentment towards the free-spirited, seemingly irresponsible BT, who is in many ways everything the more buttoned-down, controlled Will is not. Meanwhile, Will's orderly life is also frequently disrupted by the attention-seeking tantrums and tricks of his younger sister Tabby who is indulged by his parents and his friends, much to Will's chagrin and irritation.

As Will struggles to decide how to act on both his growing attraction to Mi Su and his intensifying resentment of his sister, he is shocked and angered when Tabby tells him she saw Mi Su and BT kissing. He then concocts several elaborate, detailed plans about how to get her to pay attention to him instead, plans which sometimes work (i.e. his plan to get her to kiss him) and sometimes don't (his plan to ask her to the dance). Both success and failure increase his romantic interest and, at the same time, increase his frustration that that interest isn't reciprocated in the way he'd like. Meanwhile, he makes preparations to again enter the chess tournament he won the previous year, but finds his attempts to practice disrupted by both Tabby and his obsessive thoughts about Mi Su.

On the day of the chess tournament, Will is surprised and glad that he's doing well, but his winning streak is interrupted by the arrival of his father, who tells him that Tabby has been seriously injured in an accident. At the hospital, Will is confronted by the sight of Tabby covered in bruises and bandages, hooked up to a bank of monitors and medical equipment. He welcomes attempts by Mi Su and BT to comfort him, but it's only when his mother tells him surprising truths about Tabby's feelings for him that Will comes to realize how much his irritating little sister actually cares for him - and how much he, in turn, cares about her. As the result of these (and other) realizations, Will begins to let go of many of the beliefs, values, and rigidities he has come to believe about his life, and also begins to accept life's unpredictability. He returns to the hospital, and is with Tabby holding her hand as she comes out of her coma.

In an epilogue, narration describes Will's happy, willing participation with Tabby in an event that welcomes her into the new world of school and which, in the symbolic language of the narrative, welcomes him into a new way of looking at, and relating to, the world.

More summaries and resources for teaching or studying Smiles to Go.