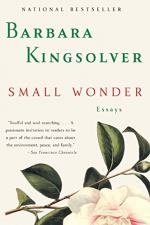 Summary
+Chapters Summary and Analysis
Small Wonder - Saying Grace
Knowing Our Place - The Patience of a Saint
Seeing Scarlet - Setting Free Crabs
A Forest's Last Stand - A Fist in the Eye of God
Lily's Chickens - The One-Eyed Monster, and Why I Don't Let Him In
Letter to My Mother - Flying
Household Words - Marking a Passage
Taming the Beast with Two Backs - And Our Flag Was Still There
God's Wife's Measuring Spoons
Important People
Objects/Places
Themes
Styles
Quotes
Topics for Discussion
Order our Small Wonder Study Guide

Barbara Kingsolver
This Study Guide consists of approximately 60 pages of chapter summaries, quotes, character analysis, themes, and more - everything you need to sharpen your knowledge of Small Wonder.

The following version of this book was used to create this study guide: Kingsolver, Barbara. Small Wonder. HarperCollins Publishers, 2003.

Barbara Kingsolver's collection of essays take on American political consciousness after the September 11 attacks and Kingsolver's perspectives on environmental crises around the world, the benefits of sustainable agricultural practices, and the importance of making ethical choices. The underlining argument of her essays is that people can take measures in their personal lives to help the environment, solve local problems, and resist the American ideologies that create divisions between people. Her message focuses on action that is directed toward hope, and resists the self-defeating attitudes of hateful violence and American greed.

Her essays, particularly "Small Wonder," "Our Flag Was Still There," and "God's Wife's Measuring Spoons," propose that American national identity has been defined by violence and warfare as a means to secure power. She argues that after September 11, there has been a surge of rage in national consciousness, particularly toward people who are from different nations or hold different views. She believes the violent uprising is a natural consequence of American ideology, which has been based on national symbols of warfare and imperialism. Kingsolver looks toward the pacifists in world history who have stood against violence and warfare and helped promote higher and more loving values. She argues in favor of peacemaking and to form bridges of understanding that break down the imagined walls between cultures. In her view, all humans are connected by history and thus warfare and bombing could only perpetuate violence around the world. She is staunchly against killing as a means to solve any problems and would prefer to see the world's resources redirected to local issues, like poverty and homelessness.

Kingsolver writes about her travels around the world with her husband and biologist, Steven Hopp, and how people have accelerated the destruction of the environment. "Seeing Scarlet" and "Setting Free the Crabs" among other essays focus on how human agricultural practices and the need for people to possess nature has resulted in species extinction. She focuses on how humans, in an attempt to come closer and take advantage of natural resources, set forth a chain of events that affect ecosystems at large. In "Knowing Our Place" among others, she also examines human attitudes toward nature, and how the importation of a "hominid agenda" results in people projecting values onto nature that only serve human interests, while neglecting environments as a whole. She is a nature lover and desires to be close to nature, but questions and challenges her own attitudes and hope that people will analyze how their personal actions may result in the destruction of nature.

Personal consumption habits are also investigated in "Lily's Chickens" and "The One-Eyed Monster..." among others. Kingsolver describes the harmful effects of current industrial agriculture and genetically modified foods. By using examples from around the world, she makes the case that genetically altered crops may contribute to greater environmental destruction by interfering with natural selection and unintentionally killing benign insects. She believes that gardening or purchasing organic foods are an affordable and more sustainable alternative. Gardening not only provides her family with delicious and whole foods, but it gives her family a sense of purpose and belonging to the land. She advocates for educating children where their food comes from in order to teach better alternatives to industrial farming. She also explains her personal choice to avoid having a television in her home, since it brings in violent images and deaths that are better dealt with more thoughtfully through written media. She believes that personal choices not only affect psychological and moral states, but can have a larger impact on the world.

Her other essays, mainly "What Good Is a Story," "Marking a Passage," and "Stealing Apples," deal with the topic of writing literature and the demise of independent bookstores. She writes about what she admires in short stories, mainly their ability to reveal some truth that she had not previously known. She also writes about her process writing poetry, describing it as a sudden inspiration that surprises her in the midst of the ordinary. She mourns the slow disappearance of independent book stores in the face of mega stores that have taken their place. She also speaks to her writing process and how her family has responded to the publication of her novels. Throughout her collection of essays, Kingsolver expresses her views on American politics, the value of nature, the ethics of food, personal choices, and her experiences as a writer. She concludes that by focusing on small wonders that surround us, there could be a new awakening to the good that still exists in a war-torn world.

More summaries and resources for teaching or studying Small Wonder.