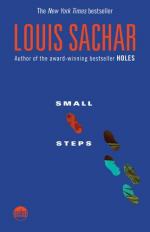 Louis Sachar
This Study Guide consists of approximately 41 pages of chapter summaries, quotes, character analysis, themes, and more - everything you need to sharpen your knowledge of Small Steps.

This detailed literature summary also contains Topics for Discussion and a Free Quiz on Small Steps by Louis Sachar.

This novel is the story of Theodore Johnson, an African-American teenager struggling to rebuild his life after a brief spell in a youth correctional facility. The novel portrays Theodore's struggles to sort through the conflicting influences of his two best friends and his unexpected involvement with a famous pop star. In addition, the book explores themes relating to trust, the corrupting allure of money, and the need to let go of the past in order to embrace the future.

As Theodore works at a new job, the author explains how he came by the unusual nickname of Armpit (the result of an encounter with a scorpion) and how he came to be in the correctional center (the result of a violent encounter with a couple of teasing teenagers). Work is interrupted first by the arrival of X-Ray, Armpit's best friend and fellow "guest" of the correctional facility, with a money-making proposal - scalp a dozen tickets for an upcoming concert by touring pop sensation Kaira DeLeon. Armpit, who is trying to turn his life around, is initially reluctant, but eventually agrees. Later, he runs X-Ray's plan past his neighbour and best friend, a young white girl named Ginny who is struggling with cerebral palsy. She warns him to be careful, and Armpit resolves to try, but nevertheless continues with the plan, helping X-Ray purchase twelve tickets.

Meanwhile, the narrative also follows Kaira as she travels across the country, exploring her relationships with her band (a collection of old time rockers that are just collecting a paycheck) and her arrogant, bossy, and dishonest manager, whom she has nicknamed El Genius.

As the date for Kaira's concert draws closer, X-Ray sells more and more of the tickets. At the same time, Armpit works up the nerve to ask a girl at school, Tatiana, to go to the concert with him. At first she agrees, but then later, apparently under the influence of her friends (who think she shouldn't be going out with someone with a criminal record) she changes her mind. Armpit then impulsively asks Ginny and she says yes, and X-Ray hands over a pair of tickets in spite of having a customer offering two hundred dollars a ticket for them. At the concert, Armpit is shocked to discover that his tickets are forgeries. As he struggles to prove what he believes to be true, he is manhandled by police, and Ginny suffers a seizure. Only the intervention of a city official saves Armpit from being arrested, and he and Ginny are taken to the concert's medical center, where they are visited by Kaira, who heard about their story from a laughing El Genius and who offers them seats on the stage. The ecstatic Ginny and Armpit have a great time at the concert, afterwards visiting Kaira backstage and Armpit finding himself attracted to her.

The next day, after confronting X-Ray about the tickets, Armpit has lunch at her hotel with Kaira, the two of them sharing an attraction to each other. A short time later, a police investigation into the forged tickets begins, leading Armpit and X-Ray into a series of lies to protect themselves and each other from criminal prosecution. Meanwhile, Kaira invites Armpit to visit her at her tour stop in San Francisco, and El Genius makes arrangements to put his plan for stealing Kaira's income into action.

When he arrives in San Francisco, Armpit and Kaira initially have a great time, but an argument ends with Kaira storming back to her hotel, where she is attacked by El Genius. Armpit, having followed her with the intention of apologizing, breaks up the attack, but not without injury to himself. Back at home, pestered by the media, Armpit is relieved to learn that the police investigation into the forged tickets is being dropped, and is able to resume his determined efforts to rebuild his life.

More summaries and resources for teaching or studying Small Steps.