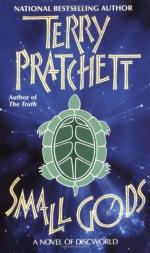 Terry Pratchett
This Study Guide consists of approximately 38 pages of chapter summaries, quotes, character analysis, themes, and more - everything you need to sharpen your knowledge of Small Gods.

This detailed literature summary also contains Topics for Discussion and a Free Quiz on Small Gods: A Novel of Discworld by Terry Pratchett.

In Terry Pratchett's Small Gods, the God Om rises from his existence as a lowly tortoise back into godhood. His disciple Brutha rises with him, becoming the leader of a newly enlightened nation.

Outside the Omnian Citadel at Kom, Novice Brutha's gardening duties are interrupted by a talking tortoise. The animal claims to be the Great God Om himself, trapped in the form of a reptile. Brutha is dubious, but nevertheless quickly develops a friendship with creature. Meanwhile, the oppressive "Quisition," lead by exquisitor Vorbis, has caused so much grief in Omnia that a secret society of revolutionaries has arisen called the Society of the Turtle.

Hearing of Brutha's photographic memory, Vorbis drafts the novice for a delegation to Ephebe. While waiting to leave, Brutha notes a group of Divine Legionaries mustering separately. Vorbis advises the novice to forget that he saw anything. During the trip to Ephebe, Vorbis foolishly commands the captain to violate a taboo of the sea, angering the sea goddess. The tortoise, meanwhile, who truly is Om, buys the sea goddess's mercy for a price to be determined later.

The Ephebians demand a non-negotiable peace treaty with Omnia. Vorbis accuses the Ephebians of killing an ambassador named brother Murduck. Omnia's navy has recently attacked Ephebe and was repelled by virtue of superior technology. Brutha, hoping to consult someone about why Om is stuck as a tortoise, eventually meets the philosopher Didactylos, who provides a scroll on the nature of the gods.

With Brutha's photographic memory, Vorbis navigates back through the maze where they are contained, opening the front gates from the inside. This allows entry for the army Brutha saw earlier. They've walked all the way across the desert. The Ephebian palace is quickly overtaken by the invaders. Brutha memorizes the most important contents of the Ephebian library, which is then burned and escapes with an assortment of allies.

Brutha's seaborne escape is interrupted by a sudden hurricane. The novice soon discovers that Vorbis has suffered a similar fate, though he is much worse for the wear. Brutha carries Vorbis through the desert until finally the treacherous exquisitor knocks Brutha upside the head with a rock, carrying Brutha out of the desert himself. Brutha wakes a week later to discover that Vorbis has declared himself the new Propget of Om.

Separated from Brutha, Om tricks an eagle into picking him up and carrying him to the citadel. With Brutha about to be executed, Om interrupts Vorbis's prophet ordainment by falling on his head, killing the exquisitor instant. Seeing this, the people begin to believe in Om once more. Flush with the faith of his worshippers, Om manifests in his godly form and declares Brutha his prophet.

Brutha negotiates a peace treaty with several invading armies while Om travels to the heavens to prevent other gods from interfering. Brutha rules Omnia for a hundred years, changing from a theocracy to a democracy and heralding in a new age of enlightenment. When Brutha dies, he finds Vorbis waiting in the afterlife, fearful to cross the spiritual desert to his final judgment. Brutha, once again, leads Vorbis across the desert.

More summaries and resources for teaching or studying Small Gods: A Novel of Discworld.