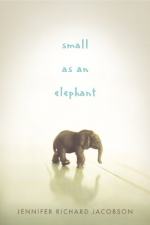 Jennifer Richard Jacobson
This Study Guide consists of approximately 36 pages of chapter summaries, quotes, character analysis, themes, and more - everything you need to sharpen your knowledge of Small as an Elephant.

Small as an Elephant Summary & Study Guide includes comprehensive information and analysis to help you understand the book. This study guide contains the following sections:

This detailed literature summary also contains Quotes and a Free Quiz on Small as an Elephant by Jennifer Richard Jacobson.

“Small as an Elephant” is a children’s novel by Jennifer Richard Jacobson which follows the experiences of eleven year-old Jack Martel as he attempts to return home after his psychologically-impaired mother abandons him at an island campsite in Maine. When the novel begins. Jack wakes up to discover that his mother, her tent, and her rental car have all vanished. Jack at first believes that his mother will shortly return, or that she is somewhere nearby. Several searches of the campground in addition to waiting reveal nothing to Jack. A few calls to his mother’s cell phone go unanswered.

Jack soon realizes he has some serious problems. He is alone, hungry, has little money, and will be unable to stay at the campground for long without his mother present. Jack befriends a boy named Aiden, whose family brings Jack around the island to spend time with them. Jack lies to them, telling his mother is sick or has gone into town for medicine and food as the situation demands. While swimming with Aiden, Jack ruins his cell phone battery. Jack begins to worry his mother may be having a mental episode. Not wanting to be taken away from her or have to live with his grandmother, he decides to try to find her.

In Bar Harbor, Jack goes to Geddy’s Bar and Restaurant after seeing a local wearing a t-shirt for the establishment. It is just like a t-shirt his mother owns. At Geddy’s, Jack meets Big Jack, who reports overhearing Jack’s mother deciding to go to the Bahamas with a yacht captain. Jack is stunned and leaves. He decides to walk home to Boston. He does not want to be taken away from his mother, and believes that if he can get home without anyone knowing, no one will report his mother to the Department of Social Services (DSS). Visiting a book and gifts shop in Bar Harbor, Jack steals a small plastic elephant, his favorite kind of animal.

Jack begins traveling south by foot. Along the way, he collects soda cans to exchange for money for food. He hurts his hand while going through a recycling bin for soda cans and plastic bottles, and is soaked in a downpour. He travels for days, camping out in the woods and stealing vegetables along the way. He travels through several towns, coming to learn that has been declared missing, and his grandmother and the police are searching for him. As time drags on, Jack becomes more and more frustrated, ultimately coming to feel as if his journey to get home is worthless and pointless.

Jack’s frustration with his mother grows. She has had bad episodes before, but not like this. Instead of going home, Jack decides to head to the animal park at York, Maine, in order to see Lydia, the elephant. It causes Jack to reflect on how he and his mother had argued about visiting Lydia the day before she disappears. Jack’s mother had called him selfish for wanting to see Lydia; Jack had questioned whether or not his mother was taking her medication. Jack secretly worries that his mother’s disappearance could be his fault.

Jack is ultimately found by Big Jack, who has joined the search for Jack. Big Jack decides to bring Jack to see Lydia. He explains that Jack’s mother leaving isn’t Jack’s fault. He goes on to explain that he understands that allowing someone else to care for him would make Jack feel like he was betraying his mother. Big Jack assures Jack this is not the case. At Lydia’s exhibit, Jack’s grandmother is waiting. She has been waiting there for him for a week. Jack happily embraces his grandmother, who explains that her daughter is now in a hospital to get better. Jack will live with his grandmother for now.

More summaries and resources for teaching or studying Small as an Elephant.

Small as an Elephant from BookRags. (c)2022 BookRags, Inc. All rights reserved.