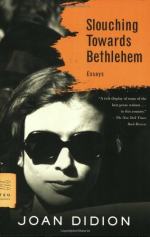 Joan Didion
This Study Guide consists of approximately 31 pages of chapter summaries, quotes, character analysis, themes, and more - everything you need to sharpen your knowledge of Slouching Toward Bethlehem.

This detailed literature summary also contains Topics for Discussion and a Free Quiz on Slouching Toward Bethlehem by Joan Didion.

Slouching Toward Bethlehem is a collection of essays by the writer Joan Didion. The essays range in topic from murder to hippies, and from the meaning of self-respect to the existence of morality in the modern world. Each essay is personal, full of insights and opinions. Each essay is a self contained commentary on life, on lifestyles, and on life's expectations based on the time they were written, the 1960s. It is a collection that will cause the reader to think, whether the reader agrees with Didion's opinions or not.

Slouching Toward Bethlehem begins with essays on life in southern California. The essays are all set in the time in which they were written, the nineteen sixties, and provide commentary on life as seen through Didion's eyes. The first essay is about a woman, Lucille Miller, who was put on trial in 1965 for the murder of her husband. Mrs. Miller claimed that her car accidentally caught on fire after a nail in her tire caused her to hit the curb. However, prosecutors claimed that Mrs. Miller intentionally poured gas on her unconscious husband and then attempted to drive the car over an embankment. When the car would not navigate the embankment, Mrs. Miller was accused of lighting her husband on fire and watching him burn. Didion presents the case with the opinion that it was the expectations of grandeur prevalent in San Bernardino that put Mrs. Miller in a position to believe it was reasonable for her to kill her husband in order to achieve her heart's desire, another man.

Then Didion turns her attention to movie idol John Wayne. The author writes her essay in the aftermath of Wayne's first bout with cancer. As a fan and a personal friend, Didion is devastated by Wayne's illness and writes as an ode to his strength. Then, she writes about Joan Baez and her school of non-violence. From here, the author chooses to include an essay on a Communist she once interviewed and an essay on the public's obsession with the rumors swirling around recluse billionaire Howard Hughes. After this, Didion writes an observation on politics in California and the absurdity of young couples getting married in Las Vegas.

Didion's essay, "Slouching Toward Bethlehem," focuses on the hippie movement in the Haight-Ashbury district of San Francisco. Didion's essay is a grouping of her observations of the people in the area as she spent time attempting to interview key people involved in the movement. Didion presents her observations with a tone that is an attempt at objectivity; however, the reader can infer the author's disapproval of some of the situations she encounters, such as the teenagers who ran away from home because their parents did not approve of their style of dress and their choice of friendships.

The collection then changes to a more personal tone. Didion begins this section with an essay about her habit of keeping notebooks. She uses the essay to try to figure out why she would have a habit of this kind when she cannot always remember what the notes mean. The next essay is about self-respect, another on Hollywood, and another on morality. Finally, Didion includes an essay on going home to her family in Sacramento and the impact it has on her husband.

The last section of the book covers many things, including the impact of war on Hawaii, the uniqueness of Alcatraz, and the beauty of Sonora. Didion ends her book with an essay on her reasons for leaving New York. She moved to New York as a young woman looking for adventure, and she enjoyed her time in New York despite abject poverty, but with time and maturity discovers that a lack of naivety takes the fun out of living so far from everyone she knows and loves. Finally, Didion gives in to homesickness and returns to California to make a new life with her new husband.

More summaries and resources for teaching or studying Slouching Toward Bethlehem.