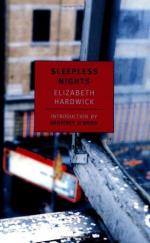 Elizabeth Hardwick
This Study Guide consists of approximately 23 pages of chapter summaries, quotes, character analysis, themes, and more - everything you need to sharpen your knowledge of Sleepless Nights.

When she is in her fifties, Elizabeth looks over the memories of her life and sees a string of people that she has known, many of whom have died by now. She examines her memories and thinks about what she has learned from various experiences, from her childhood in Lexington, Kentucky, to Amsterdam as a young woman, and New England as an adult.

When Elizabeth is a child, she is one of nine children, in a family that is obsessed with horse racing. They especially love the Kentucky Derby, and, in fact, Elizabeth has two brothers who die around the racetrack. Elizabeth gets along with her father, but she never really comes to understand her mother, who seems to accept all that life sends her way with a tired grace. As an adult, Elizabeth is still haunted by a desire to know who her mother really is. Many of these thoughts are composed as letters to Elizabeth's friend "M." When Elizabeth is a young woman, she gets involved with some Communists, but this does not last for very long.

Elizabeth has several boyfriends, but none of them leave a very permanent mark on her life. She moves to Amsterdam with one boyfriend, where she spends a summer observing the passionate love affairs of a Dutchman named "Dr. Z." "Dr. Z." cannot choose between his wife and two other women, but in the end, only his wife stays with him. Back in New York City, Elizabeth becomes enchanted with the singing of Billie Holliday, whom she goes to see sing as often as she has the chance. For a while, she has a pseudo-married relationship with "J.", a gay roommate that she lives with for a year or two. A few times, she sleeps with her friend Alex, who is an eligible bachelor who finally settles down as an older man. She lives in a boarding house for single women for a while.

When Elizabeth is older, she becomes more jaded about the way things tend to progress in life. She spends time living in Boston, Maine, and New York. Elizabeth knows several humble cleaning women, and is moved by the diligent, regular rhythms of their lives, usually punctuated by tragedy. Elizabeth wants to make sense of her memories, and create some sort of pleasant, coherent picture of her own life. She realizes that the best she can do is to tell her own story, and try not to lie too much.

More summaries and resources for teaching or studying Sleepless Nights.