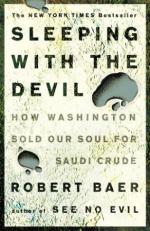 Sleeping with the Devil: How Washington Sold Our Soul for Saudi Crude Summary & Study Guide

Sleeping with the Devil: How Washington Sold Our Soul for Saudi Crude Summary & Study Guide Description

Sleeping with the Devil: How Washington Sold Our Soul for Saudi Crude Summary & Study Guide includes comprehensive information and analysis to help you understand the book. This study guide contains the following sections:

This detailed literature summary also contains Topics for Discussion and a Free Quiz on Sleeping with the Devil: How Washington Sold Our Soul for Saudi Crude by Robert Baer.

Robert Baer was a CIA case officer for many years and was stationed in the Middle East. He becomes interested in the radical Islam of the Muslim Brotherhood and tries to learn what he can about the organization and finds that the CIA doesn't have much information about them. Baer becomes interested in the links between the royal House of Sa'ud and the Muslim Brotherhood and the implications for world terrorism and stability.

The United States seeks to protect its source of oil. The United States and the world economy are dependent on it. A small fluctuation in oil prices or supply sends ripples through the world economy. When Baer begins to research the Muslim Brotherhood and the problems in the Middle East, he finds that all of the evidence points to Washington and Saudi Arabia and the oil that connects them.

Baer examines this relationship between the United States and Saudi Arabia. He looks at the House of Sa'ud and its bribery and corruption, human rights abuses and funding of Islamic fundamentalist groups including terrorists like Osama bin Laden, who is a member of the Saudi royal family. He reports on the payoffs and bribes involved in doing business with the Saudi royal family and how official Washington is a part of it. The Saudis are known to be very helpful to former government people after their terms of service expire.

Baer feels that the CIA misread the situation on the Muslim Brotherhood and the danger they presented for the world. The CIA was more interested in using them in the war against Communism as in Afghanistan and helped to establish and fund training camps. These later become the training camps of al Qaeda.

The Saudis accepted the radical Wahhabis after they were expelled from Syria. Saudi funding helped build the schools and mosques in which they preached. The Saudi non-royal population lives in an oppressed society and ninety-five percent of the educated population under the age of forty-one supports bin Laden. Most of the population has contact with the radical Wahhabis sect. Baer concludes the Saudi Arabia is a tense situation that is waiting to explode. The United States continues to ignore the situation because of its dependence on oil.

Baer writes a book that is fascinating to read. The book is easy and quick reading and well worth the reader's time.