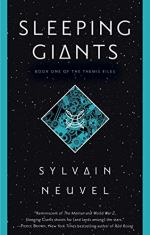 Sylvain Neuvel
This Study Guide consists of approximately 45 pages of chapter summaries, quotes, character analysis, themes, and more - everything you need to sharpen your knowledge of Sleeping Giants.

The following version of this book was used to create this study guide: Neuval, Sylvain. Sleeping Giants. Del Rey. 2016.

Sleeping Giants is a science fiction novel by Sylvain Neuvel in which an unknown interviewer and scientist Rose Franklin attempt to decipher the alien origins and purpose of a giant robotic weapon. Told by way of case files – transcripts, diary entries, and other documents – the novel spans the course of four years, beginning with a prologue set when Rose is 11 years old.

When the novel begins, Rose takes out the bike she has received for her birthday, only to fall into a massive hole near Deadwood, South Dakota, in which is a giant hand. Seventeen years later, Rose now spearheads the effort to determine what the hand is, and to crack the code of the symbols featured on it. At the same time, two American pilots, Kara Resnik and Ryan Mitchell, testing Syrian airspace for radiation, return over Turkey when another body part appears beneath them, activated by the radiation they trail. Because of this, Kara and Ryan are tasked to be a part of Rose’s team. A French-Canadian linguist, Vincent Couture, is brought on board to help decipher the symbols. Scouring the globe, the team completes the robot.

The team is watched over, protected by, and instigated by an unknown interviewer (to whom the files belong and who appears in most of the files speaking to the members of the team). The interviewer has immense power that spans presidential administrations, and indeed he only has two equals: the sitting president and an unidentified subject whom he meets in Washington D.C. The unidentified subject turns out to be the descendant of alien soldiers who came to Earth as the most far-flung colony of their alien empire, to guard it against the threat of invasion using giant war machines. When the danger had passed, they left one robot behind in pieces so that when humanity advanced enough technologically, it could operate the robot on its own and prove worthy of alien contact – or destruction. The ability to master the atom for war is the sign of humanity’s advancement, and progress by the 2010s has allowed the robot to be found, reassembled, and activated, for it uses radioactive material as fuel. The aliens are now watching to see what becomes of the robot they left behind.

Kara and Ryan become pilots for the robot, but they are unable to make much progress because the robot only responds to Kara. When Vincent attempts to operate the robot, he is successful, meaning he and Kara are both descendants of the aliens – the only ones who can operate alien machinery because of their genetics. As a result, Greek geneticist Alyssa Papantoniou is brought on board to study Vincent and Kara. But a testing accident on the robot destroys part of Denver International Airport, kills hundreds (seemingly including Rose), and exposes the top secret project to the world. The United States then goes public with the truth about the robot, and sinks it in the Puerto Rico Trench so no country may harness its destructive power. Secretly, the interviewer oversees a consortium of nations other than America which buy into a project to recover the robot.

The new secret project is overseen by Alyssa. But when the project is exposed because of Alyssa’s incompetence, the United States must intervene – now holding the moral high ground – to take custody of the robot – with everything happening at the workings of the interviewer. The United States then gifts the robot to the UN to form the Earth Defense Corps, a multinational effort to prepare for potential alien invasion. As the novel ends, in an epilogue, Rose wakes up on the side of a road in Ireland, with no memory of the project and no memory of the past four years – though she does remember everything before.

More summaries and resources for teaching or studying Sleeping Giants.