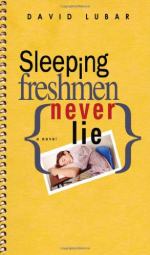 David Lubar
This Study Guide consists of approximately 36 pages of chapter summaries, quotes, character analysis, themes, and more - everything you need to sharpen your knowledge of Sleeping Freshmen Never Lie.

Scott Hudson begins his year as a freshman at J.P. Zenger High School with some trepidation. He soon realizes that some people have changed, including a class mate named Julia Baskins who has become beautiful over the summer. Scott is soon connected every morning to another classmate, Louden, who is better known as Mouth. Scott finds that he's not in classes with any of his three best friends, Mitch, Kyle, and Patrick, because he's carrying all honors classes and college prep classes. He likes English from the beginning and Mr. Franka becomes a mentor to him.

Meanwhile a new student arrives at Zenger High. Her name is Lee and she has dozens of piercings with wildly colored hair and strange clothing. She and Scott connect over literature and Scott quickly realizes they have some similar likes though he can't get past the need to catch Julia's attention. Scott suddenly has another new "friend" in Wesley, a tough senior who comes to like Scott though they have little in common.

Scott tries to find the place where he'll fit in but his best friends are slipping away. Mitch quickly gets a girlfriend who takes all his time and Patrick moves away, first to Texas then to Japan. Kyle joins the wrestling team and soon puts Scott down for his crush on Julia. Time passes and Julia's boyfriend, Vernon, beats Scott up. Scott realizes that what a person says and does can have a profound impact on the life of another when Mouth attempts suicide. He also learns that people are not always what they seem.

In the midst of the whirlwind of his freshman year, Scott's older brother Bobby is struggling to find his own place in the world and Scott discovers that Bobby can barely read. Scott is also watching his parents deal with the impending birth of their third son and Scott sets out to write down words of wisdom for the baby.