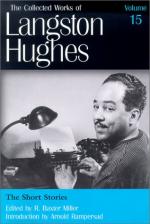 Introduction & Overview of Slave on the Block

Langston Hughes
This Study Guide consists of approximately 45 pages of chapter summaries, quotes, character analysis, themes, and more - everything you need to sharpen your knowledge of Slave on the Block.

Slave on the Block Summary & Study Guide includes comprehensive information and analysis to help you understand the book. This study guide contains the following sections:

This detailed literature summary also contains Bibliography on Slave on the Block by Langston Hughes.

"Slave on the Block," by Langston Hughes, is the story of a well-meaning but patronizing white couple's interactions with their young black employee. With cutting irony, Hughes dramatizes the tension that arises when the couple takes the young black man into their home in order use him as a source of artistic inspiration. Hughes presents the psychological dynamics between black and white characters in order to criticize the limitations of a racially divided society and to illustrate the subtle as well as overt forms racism can take.

"Slave on the Block,"was first published in Scribner's magazine in September, 1933, when Hughes was 31. It also appeared in a collection of short stories entitled The Ways of White Folks, which came out the following year. Hughes had already established his reputation as a major voice of the literary movement known as the Harlem Renaissance, but The Ways of White Folks was his first collection of short stories. Best known as a blues poet, Hughes devoted the main part of his career to writing about the experiences and expressions of ordinary, urban black people. The Ways of White Folks marks a temporary departure from this topic, focusing instead on the strange and contradictory racial attitudes of white people as seen from a black point of view.

Though The Ways of White Folks received favorable reviews when it came out, praised for its assured ironic voice and incisive understanding of human psychology, some critics found Hughes's portrayal of white characters unfair. Since then, scholars have responded that Hughes's critical portrayal of whites is a mark of maturity and an important step in the development of African-American literature.

More summaries and resources for teaching or studying Slave on the Block.

Slave on the Block from Gale. ©2005-2006 Thomson Gale, a part of the Thomson Corporation. All rights reserved.