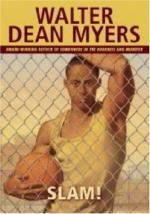 Walter Dean Myers
This Study Guide consists of approximately 25 pages of chapter summaries, quotes, character analysis, themes, and more - everything you need to sharpen your knowledge of Slam!.

“Slam!” is a young adult novel by Walter Dean Myers. The story revolves around the efforts of seventeen year-old Greg “Slam” Harris to play basketball, while maintaining his academics and his personal life. Slam lives in Harlem and attends the prestigious magnet school Latimer in the South Bronx. The school is predominantly white. It has a failing basketball program. Slam is attending Latimer as part of a policy that enables schools to become more diverse.

Over the course of several months, Slam helps lead the Latimer Panthers to victory, including one over his former school’s team. Slam’s lifelong friendship with Ice disintegrates as Ice turns to drug dealing to get ahead. Slam’s love life heats up when he begins seeing Mtisha. At the same time, Slam’s grandmother gets sick and goes into the hospital. She will recover eventually. Slam’s father, recently unemployed, turns to the bottle. Slam’s mother holds everything together.

Goldstein is the team's assistant coach. He becomes a grandfatherly mentor to Slam, telling Slam that life is a game as well- it can be won, or it can be lost. The choice is ultimately up to Slam. Slam takes Goldstein’s advice and looks ahead to the future.

More summaries and resources for teaching or studying Slam!.