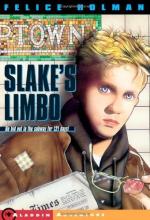 Felice Holman
This Study Guide consists of approximately 24 pages of chapter summaries, quotes, character analysis, themes, and more - everything you need to sharpen your knowledge of Slake's Limbo.

Slake's Limbo by Felicia Holman focuses on Aremis Slake, a teenage boy who is bullied constantly. He has no one to take care of him. Slake escapes his problems by living in the New York City subway for 121 days.

Bullies beat up Slake all the time. They chase and torment him. One day, the bullies chase Slake and he runs down into the subway. He takes a train to Central Park and climbs a tree. The groundskeeper yells at Slake that he will call the cops. Slake cannot take the harshness of the above ground world anymore. He runs to the subway, ducks the turnstile and lives in the subway for the next 121 days.

He runs into the tracks to escape the man in the change booth who sees him go under the turnstile. Slake searches for an alcove, where train workers usually stand when oncoming trains go by. He finds a jagged wall opening instead. It is a small concrete room. He makes it his home or secret hideout.

To survive, Slake resells old newspapers. He collects them from the trains, smooths them out and resells them. He makes enough money to buy himself a meal at the lunch counter daily. Slake has a routine where he wakes up early, resells papers and then rides the trains all day long. He is a scavenger who collects discarded items and makes use out of them for either his necessities or art projects.

At the lunch counter, the waitress starts to bring Slake extra food. The manager asks Slake if he wants a job sweeping and mopping in exchange for a good meal. Slake agrees. Every day he receives a huge meal plus extra food for the rest of the day.

A train accident happens on the tracks where Slake's hideout is. The police barricade the track entrance. Slake cannot go to his home. He is very upset. The concrete wall has fallen down. The city must repair it immediately and it will take a long time. Finally, Slake returns to his hideout, but he is depressed because his home will be taken away soon. He gets chills and a fever. The repairmen come. Slake holds up a sign that says STOP and faints. A train conductor picks him up off the tracks.

Slake goes to the hospital. He enjoys the meals, warmth and real bed, but he feels the loss of his home. A social worker says she will place him in a juvenile facility so she can locate his family. Slake leaves the hospital by himself instead. He is about to go back underground, but decides to stay above ground to face his problems and live his life.

More summaries and resources for teaching or studying Slake's Limbo.