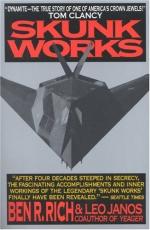 Skunk Works: A Personal Memoir of My Years at Lockheed Summary & Study Guide

Skunk Works: A Personal Memoir of My Years at Lockheed Summary & Study Guide includes comprehensive information and analysis to help you understand the book. This study guide contains the following sections:

This detailed literature summary also contains Topics for Discussion and a Free Quiz on Skunk Works: A Personal Memoir of My Years at Lockheed by Ben Rich.

Skunk Works is a personal memoir written by the chief engineer of Lockheed's Skunk Works, Ben Rich. The book tells of his first experiences at Lockheed during the 1950s at the height of the Cold War. It ranges all the way past the First Gulf War, and describes the many, varied events that occurred and projects that were undertaken at Lockheed's aerospace development wing, The Skunk Works. The first four chapters recount the building of the first stealth bomber. These chapters are used to introduce us to the main cast of characters, which include various co-workers, pilots and government employees, particularly with the Air Force and CIA. We are also introduced to the second main character, Kelly Johnson, the chief of Skunk Works prior to Ben Rich and Ben's boss for decades. Chapter Five starts over, returning to Ben's first days with the company back in the early-1950s.

Throughout Chapters 5 through 8, he explains the odd inside joke that gave the Skunk Works its name, along with the entire story of the conception, construction and operation of the famed U-2 spy plane. It covers the political aspects of the plane, particularly the role it played in American foreign policy during the Cold War. Chapters 9 through 12 explain the conception, construction and operation of the Blackbird, the famous jet that could exceed Mach 2 and could spy and launch missiles from 80,000 feet. The next three chapters cover the stillborn project of a stealth submarine, the departure of Kelly Johnson from Skunk Works, and the two billion dollar boondoggle of a new line of stealth bombers. During this time, the authors have a variety of 'other voices' contribute to the story, including co-workers, pilots and even a few secretaries of defense.

Further, Rich covers many of the technical details and challenges that the Skunk Works team faced overcoming engineering problems, along with the more straightforward difficulties with funding and politics. He litters the story with personal details, sometimes discussing pilots who were injured, captured or killed. He also tells part of his own personal story, including the death of his wife and his second marriage. He even delves into the life of his boss, Kelly Johnson, with whom he eventually became very close, following years of being intimidated by him.

The book concludes with some frank thoughts from Rich about the nature of the aerospace industry, the challenges it currently faces and the challenges it will face in the future. He uses his experiences in the book to make certain recommendations about how to run the industry in the future. The Skunk Works was a very successful and innovative business model. Rich explains how the operation was such a success and how to copy and spread the model to continue to keep the United States at the forefront of military power.