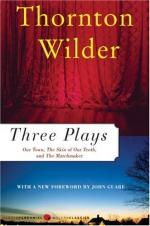 Introduction & Overview of The Skin of Our Teeth

The Skin of Our Teeth Summary & Study Guide Description

The Skin of Our Teeth Summary & Study Guide includes comprehensive information and analysis to help you understand the book. This study guide contains the following sections:

This detailed literature summary also contains Bibliography and a Free Quiz on The Skin of Our Teeth by Thornton Wilder.

Thornton Wilder completed his sixth, and perhaps most ambitious, play, The Skin of Our Teeth, on January 1, 1942. After trial runs in New Haven, Connecticut, and Baltimore, Maryland, the play opened on Broadway at the Plymouth Theater on November 18, 1942. The production—directed by Elia Kazan and starring Tallulah Bankhead (Sabina), Frederic March (Mr. Antrobus), and Florence Eldridge (Mrs. Antrobus)—received positive reviews and ran for 355 performances. Audiences and critics applauded Wilder's unconventional drama about the history of humankind. Most reviewers agreed that the playwright had produced a work that would revitalize American theater; as Brooks Atkinson wrote in the New York Times, "The Skin of Our Teeth stands head and shoulders above the monotonous plane of our moribund theater—an original, gay-hearted play that is now and again profoundly moving, as a genuine comedy should be."

Disrupting traditional notions of linear time, Wilder's play tells the story of the twentieth-century American Antrobus family in three acts which recount such epochal events as the onset of the Ice Age, the start of Great Flood, and the end of the Napoleonic Wars. Ending exactly as it began, the play illustrates the cyclical nature of existence, celebrating humanity's resilience, inventiveness, and will to survive. Although the play offers an age-old message, it does so in an untraditional form, rejecting the conventions of naturalistic drama. Not only do the characters appear to be both middleclass Americans and allegorical figures, but they also repeatedly drop out of character and speak directly to the audience, breaking theatrical illusion and reminding viewers that they are watching a play. Combining modern theatrical experiments and timeless human themes, Wilder produced a work that would both challenge and entertain generations of Americans. Along with Our Town (1938), The Skin of Our Teeth is considered Wilder's theatrical masterpiece and an invaluable cornerstone of modern American drama.