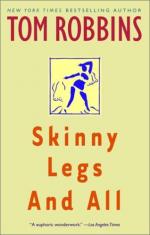 Tom Robbins
This Study Guide consists of approximately 45 pages of chapter summaries, quotes, character analysis, themes, and more - everything you need to sharpen your knowledge of Skinny Legs and All.

Skinny Legs and All Summary & Study Guide includes comprehensive information and analysis to help you understand the book. This study guide contains the following sections:

This detailed literature summary also contains Related Titles and a Free Quiz on Skinny Legs and All by Tom Robbins.

Part history lesson, part social satire, and part self-help book, Tom Robbins's Skinny Legs and All takes the reader on a wild, humorous, and enlightening ride. The story begins with a couple of newlyweds taking a ride in a "turkey." From that point, it is clear that Robbins's work isn't your standard novel. The book is broken up into seven sections, or veils, inspired by the ancient Dance of the Seven Veils. In Skinny Legs and All, the veils mask the keys to happiness. Through his characters and commentaries, Robbins reveals what these veils are.

The main characters are Ellen Cherry Charles, an artist, and her husband, a beer-drinking, regular guy named Randolph "Boomer" Petway. With Boomer in the middle, Ellen Cherry is on the side of art and beauty, with the Reverend Buddy Winkler, her father's cousin, on the other. Buddy is a fiery Southern preacher scarred by red pustules, telling his Colonial Pines, Virginia, congregation about the end of the world and finding the devil in everything from dancing to art.

It's Buddy's influence that convinces Ellen Cherry's father, Verlin, to accompany Buddy to Ellen Cherry's college art class, where they are painting nude portraits. They physically remove her from class and college, violently scrubbing the makeup off her face and calling her Jezebel. She runs away to Seattle, where Boomer gets her to marry him with an altered Airstream RV, made up to look like a turkey.

On a trip from Seattle to New York, the couple awakens an ancient painted stick and conch shell while having sex in a cave. Joined by a dirty sock, silver spoon, and can of pork and beans, left behind by the couple, the five objects become main characters in the novel. The stick and shell think they have been awakened in time for the Third Temple to be built, which will signal the Second Coming. On their journey to Jerusalem, their history, which mirrors the ancient history of Jerusalem, is told through Can o' Beans. Only a keen student of ancient life will fail to learn something new.

When they reach New York, Robbins skewers the modern art scene, as Boomer, the guy who dresses in Hawaiian shirts and jeans, is considered an artist, while Ellen Cherry is ignored. During their breakup that follows, Ellen Cherry takes a job at the I and I, a restaurant started by a Jew and an Arab that they hope will inspire peace in the Middle East. The restaurant is bombed a few weeks after it opens. The owners rebuild, and, in an effort to drum up business, hire a Middle Eastern band, soon to be joined by a beautiful, young belly dancer.

Meanwhile, Reverend Buddy is working on his plans for a world war. At sleep at his cousin's house, he claims that he has received a message from God. The message is to build the Third Temple, the same one the painted stick and conch shell believe they have been awakened to return to. Buddy doesn't want to wait for the Second Coming; he wants to force it to happen. His plan involves destroying a holy Muslim shrine with the help of radical Jews that will start a war. With the shrine out of the way, the Third Temple will be built and Jesus will return.

In New York, Ellen Cherry is despondent over her disappointment with the New York art scene, and the I and I is thriving. The restaurant gains national prominence thanks to the popularity of their "young Salome," the nickname given to the belly dancer and a reference to the biblical performer of the Dance of the Seven Veils. It is only after becoming inspired by a mural painted by Ellen Cherry that the young girl agrees to her own Dance of the Seven Veils. There's a catch: She'll perform the dance on the same day as the Super Bowl. When the dance is performed, half the restaurant is watching her; the other half watches the game. The half that watches the dance gains knowledge from an inner voice that broadcasts a different lesson for every veil that is dropped. It's also a final opportunity for Robbins to sum up the "veils" that are keeping people from finding true happiness. These range from religion and money, to governments and fear of sexuality.

The dance also provides the end for Reverend Buddy, who after having his plans stopped by a sympathetic Vice President, is shot while attacking the young dancer. In Robbins's novel, art and beauty win out over fear and hatred, as Buddy dies and Ellen Cherry and Boomer reunite, with a happy life seemingly ahead of them.

More summaries and resources for teaching or studying Skinny Legs and All.

Skinny Legs and All from BookRags. (c)2022 BookRags, Inc. All rights reserved.