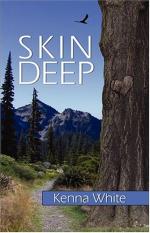 Kenna White
This Study Guide consists of approximately 32 pages of chapter summaries, quotes, character analysis, themes, and more - everything you need to sharpen your knowledge of Skin Deep.

Jordan Griffin is a young woman living on her own in Seattle when, as the assistant editor for a magazine, she's assigned a story about an elusive and reclusive photographer, Reece McAllister. Reece is a former broadcast journalist who has given up the action of the job to become a photographer of wildlife and scenery in the region. Jordan makes contact with Reece the first time at a showing of her work. There, Jordan discovers Reece has a horrific, disfiguring scar that runs down her face and disappears into the collar of her shirt. She is initially shocked and Reece taunts her for her reaction. Jordan asks for an interview but Reece refuses and cuts the encounter short. Jordan later discovers Reece is to be at a local restaurant and pool hall, and makes arrangements to meet her best friend and cousin, Hope, there. She finds Reece but again, is unsuccessful at securing the interview.

Back in her office, Jordan is challenged by her editor to go after the story again. Jordan discovers Reece is planning a camping trip and goes to Reece's cabin where she is initially met with hostility. She eventually convinces Reece to allow her to tag along on the trip. During the days in the wilderness, the two women begin to bond, both emotionally and sexually. Reece finally consents to the interview and tells Jordan stories of her adventures as a journalist. She says the scar is the result of an accident and forbids Jordan's attempts to delve into Reece's relationship with her former lover, supermodel Pella Frann.

Jordan and Reece continue to grow into a relationship of friendship and sexual attraction. They have sex several times and it seems their relationship is progressing, though Reece continues to feel that Jordan - a beautiful young woman - is setting herself up for ridicule because of Reece's disfigured face. Meanwhile, Jordan sets out to write her story and discovers that Reece's scar was actually the result of a brutal attack by Pella, who had a mental breakdown because of her intense fear of losing her beauty due to age. Jordan toys with the idea of using the sensational story in her article but decides to honor Reece's request for privacy on this point. However, her editor, Susan, hacks into Jordan's computer and alters the story, using all the sensational details Jordan had discovered during her research. Susan's version is printed and Jordan is horrified.

Jordan quits her job because she is so angry at Susan's unethical actions. She goes to Reece, fully expecting to find that Reece will never forgive her. However, she discovers that Reece was able to see the change in the writing at the point where Susan altered Jordan's story. It's only then that Reece admits she sits on the magazine's board of directors and that she's called for Susan's dismissal. She offers Jordan the editor's job.

Meanwhile, Jordan and Reece begin to grow into an emotional and sexual relationship. Though Reece has trouble trusting because of the tumultuous relationship with Pella, they eventually find common ground and begin a life together as the story comes to a close.

More summaries and resources for teaching or studying Skin Deep.