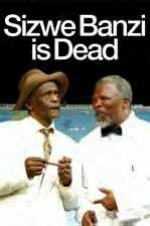 Athol Fugard
This Study Guide consists of approximately 23 pages of chapter summaries, quotes, character analysis, themes, and more - everything you need to sharpen your knowledge of Sizwe Banzi Is Dead.

"Sizwe Bansi is Dead" was written by Athol Fugard and coauthored by John Kani and Winston Ntshona, the two actors who originally appeared in the play as Styles and Sizwe Bansi. The world premiere of the play occurred in 1972 at the Space Theatre in Cape Town, South Africa. The play provides a view into the social and political racism experienced by black South Africans in the 1970s, although the type of suppression and persecution depicted in the play was present well before the 1970s and would continue into the future.

"Sizwe Bansi is Dead" tells the story of Styles, an intelligent, capable, and talented man who leaves his job as a factory worker to follow his dream of owning a photography studio. Styles pursues his talent with a camera in order to preserve the faces and identities of his people, who would otherwise be forgotten by the rest of the world. The play also tells the story of Sizwe Bansi, a man condemned by his government to a life of poverty. Although he is willing and capable of work, the stamp in his government issued “passbook” refuses him a work permit and tells him that he must leave Port Elizabeth and return to his hometown of King William’s Town where there are no work opportunities. This government edict will, in all probability, result in the starvation of Sizwe and his family. Sizwe is taken in by a man named Buntu after he is discovered in a government raid. Sizwe hopes that Buntu will figure out some way for him to remain in Port Elizabeth and find a job to support his family, but Buntu can read and when he looks at Sizwe’s passbook he sees that he is three days past due in his return home. He knows Sizwe has no chance of finding a job or remaining in Port Elizabeth with the stamps in his book. However, Sizwe discovers a passbook belonging to a dead man and, after struggling with his decision to give up his own name, decides to adopt the identity of Robert Zwelinzima. The adoption of this new identity ensures that Sizwe will be able to look for a job and provide for his family.

In the early scenes of the play, Styles’s musings are interrupted by the entrance of a man named Robert Zwelinzima, who has come to have his picture taken so that he can send it to his wife and children back home. Over the course of the rest of the play, it is revealed that Robert Zwelinzima is actually Sizwe Bansi living under the new identity he has adopted. Just as Sizwe Bansi is forced to essentially “kill” himself in order to preserve his life and the life of his family, his story illustrates the ghostly existence of the black population of South Africa. They are told who they are, where to live, and how to live, by a book developed and stamped by white men. They are forced to give up their dignity and humanity in order to continue to exist. They are constantly treated as less than human and are certainly never given the respect they deserve. However, Styles’s motivation for his photography preserving the faces and memory of his people makes it clear that the taking of Sizwe Bansi’s portrait is a moment of hope and triumph. Sizwe Bansi has been forced to alter his name and identity in order to provide for his family, but this photo taken by Styles preserves him forever as both Sizwe Bansi and Robert Zwelinzima. It reveals that he is indeed a human being with an identity and a history. This photo will preserve his name and his life for the generations to come.

The story told in "Sizwe Bansi is Dead" explores the themes of identity, self-worth, racism, and suppression. The passbook that every black man is forced to carry is the foundation for this question of identity. The passbook imposes limits on the employment and travel of all black citizens in South Africa. It takes away their freedom, making them less than men. Their entire lives are contained in this passbook, and with a single stamp one white man can totally alter a black man’s future and determine his fate. The characters depicted in the play struggle to maintain their own identities and sense of themselves as human beings under this oppressive rule. Within these circumstances, however, Styles, Sizwe, and Buntu realize that all they own is themselves. The only legacy they have to leave behind is the memory of their lives, so they strive to be the best men they can be and live the best lives they can. They show themselves to be far better men than their white “Baases” because they realize the value of human life and the sacredness of identity.

More summaries and resources for teaching or studying Sizwe Banzi Is Dead.