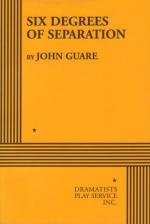 Many critics have remarked on the satiric elements in Six Degrees of Separation. Remember that satire is the use of ridicule, humor, or wit to criticize human nature and institutions and provoke change. Do you think the play is satirical? Why or why not?

Paul talks about the death of the imagination in his Catcher in the Rye speech. How does his monologue show his imaginative powers?

Conduct research to find out more about race and class relations in America in the late 1980s and early 1990s Do the Kittredges strike you as realistic representations of wealthy, white New Yorkers? Explain your answer.

The play references numerous works of art. If you had to depict the play in a visual form, what would it look like?

Imagine that Ouisa had arrived at the Waverly Theater before Paul was picked up by the...