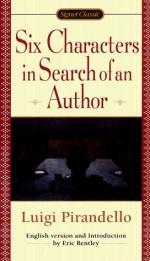 Luigi Pirandello
This Study Guide consists of approximately 45 pages of chapter summaries, quotes, character analysis, themes, and more - everything you need to sharpen your knowledge of Six Characters in Search of an Author.

An essay that interprets the Father as a schizophrenic Cambon, Glauco, ed. Pirandello: A Collection of Critical Essays, Prentice Hall, 1967.

A collection of fourteen essays, including excerpts from Adnano Tilgher's famous "Life Versus Form" and Robert Brustein's essay on Pirandello from his The Theatre of Revolt.

A collection of critical essays that deal...

More summaries and resources for teaching or studying Six Characters in Search of an Author.

Six Characters in Search of an Author from Gale. ©2005-2006 Thomson Gale, a part of the Thomson Corporation. All rights reserved.