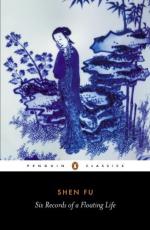 This detailed literature summary also contains Topics for Discussion and a Free Quiz on Six Records of a Floating Life by Shen Fu.

"Six Records of a Floating Life" tells the story of Shen Fu's life in 18th century China. He records his memoirs in categories so they move circularly, each one beginning in his youth, and telling the stories in that category, and then the next starts again at the beginning to tell about its stories. In order, they are "The Joys of the Wedding Chamber" about his love for Yun, his wife; "The Pleasures of Leisure" about his more quiet hobbies of gardening, painting and keeping house; "The Sorrows of Misfortune" about his losing his father and Yun, and "The Delights of Roaming Afar" about his travels through China.

In the first record, he tells the story of his first meetings with Yun when the two of them are children. The two have a bashful engagement and marry when they are seventeen years old. They remain incredibly fond of each other, stimulated by their mutual love for poetry and united even more securely by a life that sends them from place to place, and frequently finds them alienated from family. She is intelligent and unrestrained by tradition, willing and eager to shun the usual place of women staying behind while the men travel, and even disguising herself to be able to see things with Shen Fu.

The chapter on the pleasures of leisure focuses on the activities that filled Shen Fu's days. He writes about what makes a beautiful garden, and how to create those scenes and illusions with plants, rocks and their placement. He also spends long, detailed paragraphs describing the care and pruning of plants, and composes it like an instruction manual on keeping a beautiful home and garden.

Shen Fu's Sorrows chapter is when he tells about Yun's sickness. Although he never defines it completely, we know bleeding is a part of what ails her, and that it comes on when she is under emotional duress. There are several instances of disapproval from Shen Fu's family, something that is particularly hard on her. Shen Fu's irregular employment is also a trial, since he is required more than once to travel for work and money. We also hear about their children in this chapter, Ching-chun and Feng-sen. Not long after Yun dies, Shen-Fu's father dies, as well, before father and son ever get the chance for reconciliation.

His stories about traveling are filled with happy memories again, some with Yun and some without, starting in his childhood traveling with his father, he tells about business trips, concubines and pleasure-filled trips with Yun and friends. The book also includes a comprehensive appendix to define literary and historical references, a chronology, a list of measures, and an introduction and conclusion explaining the history of the book and the efforts at completion that came after it.