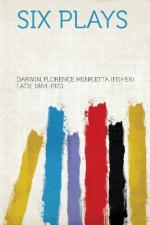 Florence Henrietta Darwin
This Study Guide consists of approximately 74 pages of chapter summaries, quotes, character analysis, themes, and more - everything you need to sharpen your knowledge of Six Plays.

This detailed literature summary also contains Topics for Discussion and a Free Quiz on Six Plays by Florence Henrietta Darwin.

A number of the six plays in this collection are among the most well known in the American contemporary repertoire (that is, plays produced in the twentieth century and later). One in particular, The Little Foxes, is considered by many to be one of the most ruthlessly drawn portraits of greed and ambition in the history of theatre. Strongly developed characters, intense drama, and occasional forays into vivid poeticism can be found in all six of the plays, which explore several common themes, many of which are explored through dramatization of social concerns. These themes include the dangers of giving in to fear, the need for power, and the pain of loneliness.

The first play in the collection, The Children's Hour, became infamous in its time for its exploration of an up-to-then taboo subject - lesbianism. A pair of female teachers, the emotionally volatile Martha and the more coolly reserved Karen, are accused by a vindictive student of having an "unnatural" relationship. Their efforts to fight the damage to their reputation and their work caused by these accusations end in failure, with the school (of which the women had dreamed of running all their lives) closing. Martha, however, eventually confesses that for her at least the accusations are true - she does care for Karen "in that way". Karen rejects the expression of love, and Martha kills herself. The play ends with the clear implication that the remorseful Karen is about to do the same.

The second play, Days to Come, is perhaps the least known of the six plays in the collection. While the action of the play is anchored in the story of a labor dispute in a small town, it can in fact be seen as a modern take on the classical tragedy. A good, well intentioned man (Andrew Rodman) falls from his position of high moral and personal status when he allows weakness and greed to govern his actions in bringing in violent strikebreakers to end the labor dispute triggered by the walkout of his employees. Along the way, he is forced to confront the failure of his marriage, the loss of his close relationship with the town and its citizens, and his own failure to live with integrity.

The Little Foxes is by far the author's best known work. It is the story of a venal, greedy, self interested trio of Southern siblings (Ben and Oscar Hubbard and their sister, Regina Giddens) who will stop at nothing, including murder, in order to achieve their goals of money and power. Regina is one of the most well known, and the most ruthless, villains in theatre history. The climactic scene of the play, in which she simply sits back and watches as her husband desperately struggles to get to the medicine that will save his life, is justifiably renowned for its stark portrayal of human brutality.

The story and central character of Watch on the Rhine are both powerful contrasts to those of The Little Foxes. The play, set in the midst of World War II, tells the story of a German resistance fighter, Kurt Muller, and what happens when he arrives at the American home of his wife's wealthy American family en route to a return to Europe to continue his mission. While there, he encounters the self-interest of the family (which he transforms, by his actions, into selflessness) and a blackmailing aristocrat-in-exile whom he eventually kills in order to preserve the integrity and secrecy of his mission. As Kurt himself suggests, he has done a bad thing in a good cause, which doesn't make the mad thing any better but does illustrate how important the good cause is.

Another Part of the Forest is a story of the earlier lives of the Giddens siblings from The Little Foxes - Ben, Oscar and Regina. Their emerging greed and self-interest is juxtaposed with that of their father Marcus, presumably the primary influence from whom they learned to be who they are. The frank, sometimes even joyful, callousness of that side of the family is contrasted to the desperate compassion of Lavinia, Marcus' husband and the children's mother, who throughout the play is desperate to atone for a sin that turns out to be more Marcus's than hers. Eventually, the tables of power and status are turned, with elder sibling Ben gaining control over the lives not only of his two siblings, Regina and Oscar, but also that of their suddenly weak father. Lavinia escapes into a new life that is part fantasy and part lifelong dream.

The final play in the collection, The Autumn Garden, is quite different in tone and dramatic content. Where the action of the other plays is, to varying degrees, anchored in the ambitions and determinations of its central characters, Autumn Garden is more reflective, less dynamically dramatic, and more of an ensemble piece. This is not to say there are not moments of drama - all the complex relationships in the piece have their sources of intense tension. But the play, with its story anchored in the mid-life reunion of four former friends, is more about a state of being, the point at which middle-aged men and women look back on their lives, see their failures rather than their successes, and wonder what the future can holds after a past that, for whatever reason, seems empty.

More summaries and resources for teaching or studying Six Plays.