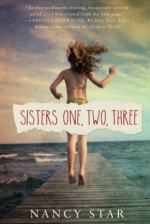 This detailed literature summary also contains Quotes and a Free Quiz on Sisters One Two Three by Nancy Star.

This study guide refers to the following edition of this book: Star, Nancy. Sisters One, Two, Three. Lake Union Publishing. 2017.

Sisters One, Two, Three is a novel by Nancy Star in which the three Tangle sisters, Ginger, Mimi, and Callie, attempt to deal with the death of their mother and coming to grips with the childhood death of their brother, Charlie. The novel itself is divided into two parts. In the first part, chapters weave back and forth through time between the present day and New Jersey of the mid-1970s, when Ginger was thirteen. Then, family matriarch, retired actress Glory Tangle, would sing a song about a brother having sisters one, two three. At the suggestion of a neighbor named Evelyn Clarke, whose children were friends with the Tangle children, the families decided to go on vacation to Martha’s Vineyard. At the same time, Glory met and seemingly developed a romantic attraction for Evelyn’s brother, Casper Diggans, though Glory was married.

Before leaving for the Vineyard, it was learned that Glory’s husband, Solly, could not come as expected because of work (though he will visit later); and Evelyn backed out when she learned that her own husband was leaving her (though her son, Thomas, will still go to the Vineyard with his Uncle Casper). At the Vineyard, Glory seemed to regress in age, carrying on with the other adults and leaving the children largely to themselves. Charlie spent his time digging a hole to China. Tragically, the sand hole collapsed on top of him, killing him. Ginger, Mimi, and Callie were all stunned and heartbroken at the tragedy, but it was Solly who urged them not to upset their mother by talking about it. It was then their mother who urged them never to speak of the tragedy, insisting they forget it and move on. Callie, deeply affected and listless after the accident, was sent away to boarding school, with Glory telling Ginger and Mimi to pretend as if Callie was not a part of the family anymore.

The novel, in the present, features Ginger, Mimi, and Callie as adults. Ginger and Mimi have their own husbands and children, while Callie remains single and rarely remains in touch. Ginger, after the tragedy of her childhood, is overprotective with her own teenage daughter, Julia, who rebels by running off with her boyfriend to find herself. When the now-aged and dementia-ridden Glory dies, Ginger and Mimi must organize the burial. As they do so, they begin to reflect on the past, and to recall certain events from childhood. Both sisters despise how their mother made them lie and forget about things. Callie shows up, explaining she has been living on the Vineyard in the house they rented in the 1970s, the house having been purchased with life insurance money by Glory after her husband’s death. Callie has a dog named Echo with her, and a letter providing instructions on cremating and burying Glory with a simple service.

The three sisters regather at the old house to work through final arrangements. Ginger and Mimi find out from the now-aged Evelyn, and the adult Thomas, that there was more to the summer than they remember in the present. They learn that not only was Charlie buried in the hole, but Callie was as well. They learn she suffered some mild brain damage before being rescued; and that Echo is her service dog. It is explained that Callie was sent back to live on the Vineyard at the insistence of the locals, including Casper, who rallied around her to take care of her in a setting removed from New Jersey. They learn their mother frequented the Vineyard, and never told them that she was in such constant contact with Callie. Before the funeral service, Thomas, Ginger, and Mimi must rescue Callie when she goes swimming, and is tired out by the pull of the tide. The day after Glory’s ashes are scattered, the three sisters find their brother’s tombstone, and set four small rocks upon it. Ginger then receives a text containing a video link on her phone in which there is a clip of Julia and her boyfriend performing the sisters one, two, three song in honor of Glory and the family.