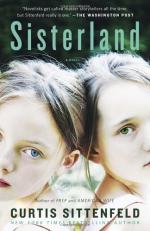 Related Topics
American Wife
You Think It, I'll Say It

Curtis Sittenfeld
This Study Guide consists of approximately 93 pages of chapter summaries, quotes, character analysis, themes, and more - everything you need to sharpen your knowledge of Sisterland.

This detailed literature summary also contains Quotes and a Free Quiz on Sisterland by Curtis Sittenfeld.

• The following version of this book was used for the creation of this study guide:

Sisterland, by Curtis Sittenfeld, is about twin sisters Daisy and Violet Schramm. The story begins in St. Louis where the Schramm sisters were born and still live – at least for some of their adulthood. Daisy, who now calls herself by a version of her middle name, Kate, married Jeremy Tucker and has two young children; Rosie who is two and Owen who is a few months old and still nursing. Her sister Violet is still single, but is dating an IT consultant named Stephanie. Bi-sexuality is new to Violet, and at first Kate is discouraging, believing it is a phase that will pass and will unnecessarily complicate her life, but she soon learns she is wrong. A small earthquake sets the tone for the city when Violet reveals that Guardian, her spirit guide, says a much more powerful one is coming on October 16th and people should prepare. Some people believe, some don’t.

Jeremy Tucker and Courtney Wheeling work in the same department at Washington University. Jeremy and Kate are close friends with Hank and Courtney Wheeling. Since their daughter Amelia and Rosie are close in age, when Kate runs into Hank at a music class for their children, they become fast friends. From then on, they spend most mornings together which is ironic, as their respective spouses do as well.

The story follows the two sisters, with segments that delve into their past to explain how some events came to pass. Both Kate and Violet are gifted with precognition, although Kate has tried to leave that part of her life behind. This is explained in a flashback of Daisy in high school when she faced mockery and abuse from her peers after they learned of her abilities. Violet has a vision about a coming earthquake and the spirit guide she calls Guardian advises her to let people know. She tells Kate who wakes with October 16th in her head. She shares the day with her sister, having worked from the strength of combined visions in the past. Violet agrees it could be the day, and informs the media. She ends up at the center of a media frenzy which includes appearances on the Today show; the hiring of a PR consultant and much unwanted attention for Kate as well.

The girls had helped out in the past. Most famously, they’d had visions that led to the rescue of missing boy Brady Ogden who had been gone for over three months before combined visions from led to his discovery just hours before Kate's marriage to Jeremy. Many people take Violet's prediction seriously. Kate gets a premonition as well, waking up to the certainty that October 16th is a date of great importance and interprets this as the day the earthquake will occur.

As the day of the coming quake nears, Kate argues with Jeremy about a conference he is scheduled to attend on that weekend, wanting him to stay with her and the children, but he refuses to take it seriously and goes anyway. While he is gone, Kate is sitting with Hank on the night of the predicted quake and he uncharacteristically kisses her. This leads to an episode of adultery that will change their lives in many ways.

While there is no earthquake on that day, Violet’s prediction saves lives; and Kate loses something she can never regain. On Jan 12th, Haiti suffers a strong earthquake causing large loss of life. Several earthquakes follow; one in Chile, one in Japan, Indonesia, China and Turkey. Geologist Courtney Wheeling claims the earth is always busy.

More summaries and resources for teaching or studying Sisterland.