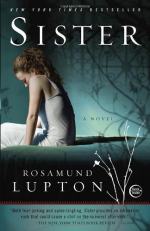 Rosamund Lupton
This Study Guide consists of approximately 37 pages of chapter summaries, quotes, character analysis, themes, and more - everything you need to sharpen your knowledge of Sister.

This detailed literature summary also contains Topics for Discussion on Sister: A Novel by Rosamund Lupton.

Sister tells the story of Beatrice Hemming's search for her sister's killer. This search leads her down many surprising, dangerous, and unexpected roads.

The book begins as a letter to Beatrice's sister, Tess. Beatrice wishes they could talk in person; she misses her very much. She tells her of how she came to live in her flat in London and how her life was changed permanently. Beatrice goes to a meeting with Mr. Wright, the man assigned to her case. She was to give a very important testimony that would send someone to prison for life. When asked when she first felt that something was wrong, she replied that it was when her mother phoned her to tell her that her sister, due in three weeks, was missing. Bee hopped on the next flight to London from New York City.

Within a few days, Tess' body was found in an old public restroom in Hyde Park; her wrists had been slashed. Mr. Wright then asks Bee to go back to when the story should really begin, so she tells of Tess's surprise pregnancy. She had been having an affair with her married tutor; he had told her he wanted no part in the life of the child. Tess was ecstatic; she saw having a baby as a miracle and was not upset that the father would not be involved. Once pregnant, she found out her baby had cystic fibrosis, a disease that had slowly taken the life of her brother. She became involved in an experimental gene therapy to replace the bad gene with a good one.

After posing as Tess during a re-creation of the last time she was seen, Bee learned from the father of the child that Tess had already had the baby and it had been stillborn. Bee could not believe Tess had not told her. After an autopsy, it is determined that Tess had committed suicide. Bee was shocked but wondered for just a moment if maybe she did not know Tess as well as she thought, considering Tess had not told her the baby had been born. She pushed this thought aside and began searching for a killer; she knew Tess would never commit suicide. Tess had suffered from the death of her brother and the abandonment of her father, so she knew suffering and also knew how precious life was. This sends Bee on dangerous and thrilling adventure into Tess's life.

As she considered possible suspects, including the father of Tess's baby, an obsessed classmate, a therapist, and a scientist, the police began to become annoyed, but Bee was determined to find her sister's killer. The killer ended up being none of these suspects. He was the sweet St. Anne's Hospital doctor who had been so willing to help Bee find information for her sister. The trial in which her sister had been involved had been hijacked by this doctor to study an IQ gene in humans; problems occurred and he had to get rid of the evidence, which was Tess. The story ends with the killer, William Saunders, drugging Bee and locking her in the same restroom in which he had killed her sister. The entire book was a letter to Tess written in Bee's mind as she lay on the concrete floor waiting for the drugs to cause an overdose or for William to return to finish the job he started. She hears sirens and voices coming closer. She tells Tess she is sorry and that she loves her.

More summaries and resources for teaching or studying Sister: A Novel.