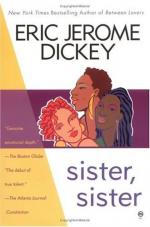 Eric Jerome Dickey
This Study Guide consists of approximately 45 pages of chapter summaries, quotes, character analysis, themes, and more - everything you need to sharpen your knowledge of Sister, Sister.

This detailed literature summary also contains Topics for Discussion and a Free Quiz on Sister, Sister by Eric Jerome Dickey.

"Sister, Sister" by Eric Jerome Dickey is a novel about the lives of three African-American women and their struggle to find themselves and men who truly appreciate them. Valerie's husband's indifference causes problems in their marriage, and she begins dating Daniel. Inda learns that her boyfriend, Raymond, is cheating on her with two different women, but she meets Michael and befriends Chiquita who was also dating Raymond but begins seeing Brown, Inda's younger brother. "Sister, Sister" is an intriguing novel that follows the intertwined lives of these three women as they leave undeserving men in their pasts and find men who are capable of recognizing their worth and appreciating their strength, thus teaching the women to do the same.

When Valerie attempts to seduce her husband, Walter, his indifference causes her to flee to her sister, Inda. Chiquita and Raymond argue over a female who calls his phone, and he strikes her. Valerie and Inda go to a dance club where Valerie is plagued with guilt after meeting and dancing with Daniel. After a wonderful date, Inda and Raymond argue when a female calls him, and she leaves. The next day, she calls Wiley, a man from the personal ads in the newspaper, and when she drives to Long Beach to meet him, she detours by Raymond's house to leave a note. Inda meets Chiquita on her way to Raymond's, and when Chiquita produces a key to Raymond's apartment, Inda realizes he has been unfaithful. Chiquita catches Raymond in bed with Gina, his fiance, and leaves in tears, followed shortly by Inda. Valerie feels guilty after meeting Daniel at the theater, breaks off their contact and returns home to her husband. When Inda stops for a walk at Shoreline Village, she runs into and befriends Chiquita.

When Valerie confronts Walter about the issues in their marriage, he tells her he does not even like her, so she packs and leaves. She buys a gas container and flammable liquid because she has nothing to lose. During dinner, Inda and Chiquita talk about past failed relationships, and Michael, a painter on the docks, flirts with Inda and gives her his card, but she leaves it on the table at the restaurant. At a nightclub, Inda runs into her brother, Brown, and introduces him to Chiquita. She goes outside for some fresh air and runs into Michael who she learns is Wiley from the personal ads, and they kiss for a while. Alone in the club, Chiquita sees Raymond and goes to him. When Inda returns to the club, she finds Chiquita gone, and Brown joins her when she gets into a fight with Raymond and Gina. After ensuring Walter is asleep, Valerie sneaks into her house and soaks him and the carpet with the liquid in her gas container, telling him she is going to burn him when he awakes. Back at the hotel, Inda prevents Chiquita from going after Raymond, and Chiquita spends an innocent night with Brown as they comfort one another's pains.

Since Valerie diluted the gas with water, Walter does not burn, but she tells him to get out of her house before leaving. When Walter calls the police, Valerie drives toward Canada, but she turns around because she has unfinished business. While Inda, Chiquita, Michael and Brown hang out, Chiquita tells her secrets to Inda but is interrupted when Brown informs Inda that Valerie tried to kill Walter and is now missing. Inda, Chiquita and Brown rush to Valerie's house where they try to figure out where Valerie is. Valerie goes to Daniel's house and seduces him. She calls Inda a few days later. After Valerie returns, the three couples hang out for a couple months until Chiquita stops coming around. Soon after moving in with Valerie, Inda catches Valerie in bed with Daniel and decides to give herself to Michael. In a mall in Long Beach, Inda runs into Chiquita with Raymond, and later, she drives by Raymond's house to leave a note on Chiquita's car, which professes undying friendship. Encouraged by Inda's note, Chiquita visits her momma in Memphis and lets go of her past hurts. When Walter begs to reconcile, Valerie meets him but refuses to forgive him for how he treated her. After a perfect weekend with Michael, Inda returns home where Chiquita waits to assure Inda that she is back for good. Chiquita also reconciles with Brown. Valerie is just friends with Daniel who is back east for school because she is regaining her freedom and finding herself, and she is finally happy.

More summaries and resources for teaching or studying Sister, Sister.