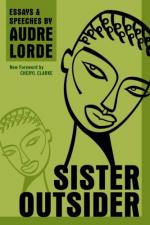 Audre Lorde
This Study Guide consists of approximately 35 pages of chapter summaries, quotes, character analysis, themes, and more - everything you need to sharpen your knowledge of Sister Outsider.

This detailed literature summary also contains Topics for Discussion and a Free Quiz on Sister Outsider: Essays and Speeches by Audre Lorde.

Sister Outsider is a collection of essays and speeches by Audre Lorde, a black lesbian feminist more widely known for her poetry. Most of the works in Sister Outsider were presented or published between 1976 and 1983 and range from travelogues (Notes from a Trip to Russia, Grenada Revisited: An Interim Report) and letters (An Open Letter to Mary Daly) to academic papers and presentations. Audre Lorde uses all of these forms to explore race and sex issues and the anger, guilt, and fear that may result from internalizing a skewed system of values.

Several themes are prominent in Lorde's essays, one of which is a deeply-held distrust for the prevailing American system of values, which she believes promotes racism, sexism, homophobia, and a host of other ills. With material profit as its core, this value system discourages the exploration of the self in favor of unquestioning adherence to societal norms. Most minority groups, of course, are not included in these norms. Exacerbating this is the fact that most minorities are relatively powerless figures in the economic sense. Worse still, the structure of society, Audre believes, encourages division and infighting in minority groups, keeping their power to a minimum.

Oppression is a major theme in all of the works in Sister Outsider. Audre illustrates her disapproval for various institutions that she sees as oppressive through her unusual system of capitalization, in which, for example, "Black" is capitalized while "america" and "christian" are usually not.

Audre Lorde is a unique figure in that she does not fit neatly into any minority group, making her a sort of "ultimate outsider." She acknowledges this, clearly identifying herself as "a forty-nine-year-old black lesbian feminist mother of two, including one boy, and a member of an interracial couple" (Age, Race, Class, and Sex: Women Redefining Difference, p. 114). This mixed identity opens her up to criticism from all sides, and because of this Lorde is able to recognize prejudice in many forms. Unlike other feminists of her time, she focuses on more than sexism, identifying racism, sexism, homophobia, and heterosexism as simply different forms of the same societal ill.

Audre Lorde was well known in her time for the intensity and even anger of her writings. The essays and speeches in Sister Outsider make it clear that Lorde's anger is a response to what she sees as the fundamental injustices inherent in the society of her time.

Audre Lorde wrote or presented all the works in Sister Outsider between 1976 and 1983. Her main audience included her feminist contemporaries, women in general, and the black community, so she often addresses these groups specifically. Her essays are intended to challenge the reader and provoke thought, often on topics that are controversial even by today's standards. This book represents a collection most of Lorde's non-poetry writings.

More summaries and resources for teaching or studying Sister Outsider: Essays and Speeches.