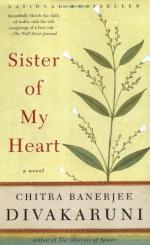 Related Topics
The Mistress of Spices
One Amazing Thing

Chitra Banerjee Divakaruni
This Study Guide consists of approximately 52 pages of chapter summaries, quotes, character analysis, themes, and more - everything you need to sharpen your knowledge of Sister of My Heart.

Sister of My Heart Summary & Study Guide includes comprehensive information and analysis to help you understand the book. This study guide contains the following sections:

This detailed literature summary also contains Topics for Discussion and a Free Quiz on Sister of My Heart by Chitra Banerjee Divakaruni.

The novel Sister of My Heart by Chitra Banerjee Divakaruni details the sorrow filled lives of two Indian cousins. These cousins, Anju and Sudha, were born on the same day and lived together as sisters in a joint family consisting of the two girls and three mother figures. In a unique structure that allows both girls to share alternating parts of their story, Sudha and Anju describe their struggles with outdated Indian customs, the memories of their fathers, arranged marriages, separation, in-laws, pregnancy, miscarriage and abortion.

The central theme of the story is the girls' undying love for each other. Ultimately the two each feel they have a reason that they are responsible for one another's happiness. For instance, Sudha felt it was her fault that Anju's father was dead. It was Sudha's father who suggested that he and Anju's father go treasure hunting when the girls' mothers were pregnant. Two bodies were found in the area where the two went treasure hunting and it was assumed both men died. Therefore Sudha felt responsible for Anju because she thought it was her father's fault that Anju did not have a living father. When the mothers learn their husbands have died, both go into early labor. Anju is born first. Anju is placed on Sudha's mother's stomach in a belief that Anju's presence would make Sudha be born more quickly. Therefore, Anju feels responsible for Sudha because she was the one who called Sudha into the world.

Along with the central theme of the girls' friendship, there is a mystery concerning the deaths of both Sudha and Anju's fathers that unravels throughout the book. This mystery affects Sudha more deeply than Anju because Sudha's father's role in the treasure hunt was so questionable. At one point Sudha believes her father is a liar, cheater and a murderer. A letter given to Sudha at the end of the novel clears up the situation and helps Sudha come to peace with her father and his memory. It is with this letter that the novel has a surprising twist.

Love and sacrifice are also important issues in this novel. Sudha first gives up her true love because she is afraid if she elopes, Anju's future father-in-law will call off Anju's wedding. Although Anju's wedding was arranged, she loves her husband because he meets with her in secret at the bookstore and encourages her to talk about books. Although not intentionally, Anju sacrifices her health and her baby to earn money so that she can fly Sudha and her baby to America. Anju realizes India is not the ideal place for a single mother to raise a baby and wants better for her friend. As the story closes, Anju welcomes Sudha and her baby in America even though she realizes her husband has an obsession with Sudha.

More summaries and resources for teaching or studying Sister of My Heart.

Sister of My Heart from BookRags. (c)2022 BookRags, Inc. All rights reserved.