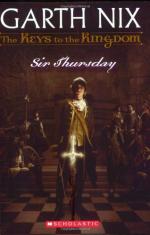 Garth Nix
This Study Guide consists of approximately 31 pages of chapter summaries, quotes, character analysis, themes, and more - everything you need to sharpen your knowledge of Sir Thursday.

Arthur Penhaligon's search for the Keys to the Kingdom continues. He has already uncovered the first three Keys and the first three parts of the Will of the Architect. Now he must continue his fight against the Morrow Days to uncover the remaining four Keys and Wills. For Arthur to succeed in his quest, he is forced to use sorcery. However, if he uses it too much he will become a Denizen. As such he will never be able to return to his rightful place as a mortal in his Secondary Realm.

Arthur must retrieve the Fourth Key and Will from Sir Thursday, the leader of the Army of the Architect, a Denizen who has vowed to destroy Arthur. Arthur's friends Leaf, Suzy, and Fred, will assist Arthur in securing both the Key and the Will. As Arthur is in the Great Maze trying to secure the Key and Will, his friend Leaf is back in their Secondary Realm trying to protect Arthur's family from Skinnless Boy. Skinless Boy has been sent to Arthur's home Realm by Lord Sunday to destroy Arthur's family. Sunday hopes to blackmail Arthur by offering his family's safety in exchange for the Keys and the Will.

Arthur does not want to be the Rightful Heir to the Architect, but accepts his responsibilities with bravery and intelligence that reveals a maturity far beyond the age of 12.

More summaries and resources for teaching or studying Sir Thursday.