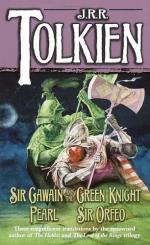 J. R. R. Tolkien
This Study Guide consists of approximately 28 pages of chapter summaries, quotes, character analysis, themes, and more - everything you need to sharpen your knowledge of Sir Gawain and the Green Knight, Pearl, and Sir Orfeo.

This detailed literature summary also contains Topics for Discussion and a Free Quiz on Sir Gawain and the Green Knight, Pearl, and Sir Orfeo by J. R. R. Tolkien.

Sir Gawain and the Green Knight is a compilation of three Medieval English poems translated by the famous twentieth century author and philologist J. R. R. Tolkien. All of the poems are translated from Middle English, the English language as spoken between 1066 and around 1470, a language on which Tolkien remains a great historical expert.

The first poem and the longest is Sir Gawain and the Green Knight. The story is something of a 'spinoff' from the standard Arthurian tales that populated the Medieval (and modern) periods. The poem begins in the Arthurian Court, with Arthur and Guinevere presiding over a Christmas-tide festival. Sir Gawain is sitting with the queen and other notables when a massive knight, covered in green garb, rushes into the court. He then challenges any knight of the round table to strike him on the condition that he may return the favor in one year and a day. Gawain takes up the offer, decapitating the Green Knight, who then picks up his head and rides off.

Gawain spends most of the next year happy and finally embarks to find the Green Chapel where the Green Knight awaits him. He finds a castle with a lord and lady that welcome him to stay with them. The lord often goes off to hunt, prompting Gawain to agree that whatever game he catches will be Gawain's if whatever Gawain catches on his quest will be the lord's. When the lord is gone, the lady attempts to seduce Gawain and only slightly succeeds, garnering two kisses and getting Gawain to take a silk belt she gives him to his battle with the Green Knight.

Gawain leaves to find the Green Knight. When they finally meet, Gawain bears his neck to the Green Knight who strikes him. The axe only nicks his neck and otherwise passes through him. Gawain appears to have one but the Green Knight reveals that he is in fact the lord of the castle and that his wife is a witch who transformed him into the Green Knight in order to test Gawain's character by drawing him to the castle and seeing if the lady could tempt Gawain and diminish his honor. Distraught and humiliated, Gawain returns to the Arthurian Court; when he is arrived, much to his surprise, he is received with mercy and forgiveness.

Pearl is a shorter poem. It is something of an allegory and theological treatise. In the poem, Pearl, the not-two-year old child of Pearl's father has died and her father is deeply grieved at his loss. In the poem he has a vision of Pearl in Paradise and has an extended conversation with her. In the conversation he learns that God has made Pearl a queen, which Pearl's father considers deeply unjust, as Pearl had not merited such grace from God given that her life was so short. Pearl then gives an extended argument that no one merits a particular amount of grace and that God can shower his grace on anyone. Ultimately Pearl's father relents and is delighted to find not only that Pearl is to be a citizen of the New Jerusalem but that she has earned God's favor regardless of what she has done.

Orfeo is the shortest piece and tells the story of King Orfeo of Tracience, a famous harp player, who loses his queen, lady Heurodis, to the Faerie King. He places a steward in his stead and leaves on a ten year journey to win her back. Eventually he enters the Faerie King's palace and wins Heurodis by impressing the Faerie King with his harp-playing. When they return, King Orfeo is joyously restored to the throne.

More summaries and resources for teaching or studying Sir Gawain and the Green Knight, Pearl, and Sir Orfeo.