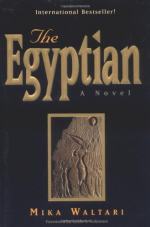 Sinuhe the Egyptian: A Novel Summary & Study Guide includes comprehensive information and analysis to help you understand the book. This study guide contains the following sections:

This detailed literature summary also contains Topics for Discussion and a Free Quiz on Sinuhe the Egyptian: A Novel by Mika Waltari.

Sinuhe the Egyptian is the memoirs of a physician who wants to treat the poor but is drawn into politics and warfare, feeling himself fated always to be alone—perhaps because he is a son of a Pharaoh cast upon the waters of the Nile at birth.

Exiled from his beloved Thebes, Sinuhe records the events of his life, in which he can never marry, have children, and treat the poor as a physician. Sinuhe grows up believing he is found in the Nile shortly after birth and adopted by a physician, Senmut, and his wife Kipa. He grows up happily in the poor quarter of Thebes, assisting his father in treating poor patients and hearing his mother's stories. After elementary school, Sinuhe is accepted as a student in the House of Life thanks to his father's friend, the royal skull opener, who later selects Sinuhe to assist him at Pharaoh Amenhotep III's deathbed. That night, the royal heir leads Sinuhe into the desert and sees a new god, Aton, during an epileptic seizure. That night Sinuhe also meets the future general and pharaoh Horemheb.

Early in his career, Sinuhe signs over to the beguiling Nefernefernefer his infirm parents' property, and guilt over their suicides haunts Sinuhe for the rest of his life. It also helps motivate a three-year journey abroad, which broadens his scope and helps him mature. In Smyrna, he makes friends with King Aziru of Amurru before being sent by Horemheb to survey Mitanni, Babylon, and Hatti. In Babylon, Sinuhe meets one of the loves of his life, beautiful Minea, whom he accompanies home to Crete, knowing she is fated to die in the labyrinth. After grieving piteously, he returns to Thebes.

There Sinuhe sets up a simple practice, legally frees his slave Kaptah, learns that Kaptah's sound investments have made him wealthy, and falls in love again with Merit. Intuiting his special destiny, she refuses to marry him, but shares her sleeping mat. Too late, he finds out that she bears him a son. Another spell of royal epilepsy brings Sinuhe to the founding of Akhetaton, where, as royal physician, Sinuhe know the patient is deranged, but is attracted by his idealistic teachings about Aton. On a visit to Thebes, Sinuhe is recruited by assassins, pieces together information suggesting that he is royal, and loses Merit and Thoth in rioting.

Angry enough to administer poison to Akhnaton, Sinuhe accompanies Horemheb to liberate Syria, a campaign that ends when Horemheb becomes Pharaoh. Sinuhe wishes Aton's utopia could be realized, heretical words that bring about his exile, where he writes his memoirs to comfort his own heart.

Sinuhe the Egyptian: A Novel from BookRags. (c)2022 BookRags, Inc. All rights reserved.