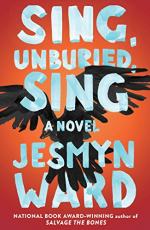 Ward, Jesmyn
This Study Guide consists of approximately 71 pages of chapter summaries, quotes, character analysis, themes, and more - everything you need to sharpen your knowledge of Sing, Unburied, Sing.

Sing, Unburied, Sing follows the story of a family whose history is tied up with the Mississippi State Penitentiary, also known as Parchman Farm. In the present day, the 13-year-old Jojo and his little sister accompany his mother, Leonie, and her friend, Misty, on a trip to retrieve the children's father, Michael, from Parchman. Leonie's own father, River (Pop to his grandchildren), was falsely imprisoned there during the 1940s. They leave behind Leonie's mother, Mam, who is dying of cancer, and Pop, (who cannot bring himself to go back to Parchman.

The novel opens with Jojo accompanying Pop as he slaughters a goat. It is Jojo's birthday. That night, while the family celebrates with a store-bought cake, Michael calls to tell Leonie that he is being released from prison. Leonie decides to pick Michael up from prison and to take her children on her journey with her. Leonie picks up an extra shift at the bar where she works that night and gets high afterward with Misty, who convinces her the trip to Parchman is a good opportunity to smuggle drugs to the lawyer who defends her boyfriend (also incarcerated) and Michael. The next morning, Leonie stops at the house of Michael's parents with a note explaining that she will be picking up Michael. While she is there, Big Joseph, Michael's father, aims a gun at her, so she speeds off. On the way there, Leonie and Misty stop off to pick up a load of crystal meth, which they hide in a secret compartment of the car placed there by Michael before he went to prison for manufacturing drugs.

Kayla becomes ill after the stop at the house and gets sick several times in the car. Desperate to treat her daughter, Leonie gathers blackberry plants to treat her daughter's illness, despite not remembering most of the herb craft her mother taught her as she was growing up. Fiercely protective of his sister, Jojo knows that his mother is not as knowledgeable as she needs to be to treat his sister, so he grows fearful about the prospect of her giving anything to his sister. When the family arrives at the house of Al, the lawyer for both Michael and Misty's boyfriend, Leonie boils the blackberry plants and forces her daughter to drink the resulting mixture. Fearful that the mixture will kill his sister or make her sicker, Jojo secretly forces her to vomit the mixture while his mother and Misty do drugs with their host.

The next morning, Kayla is still ill, but Misty and the family make their way to Parchman. At Parchman, they pick up Michael, but they also pick up a ghost, Richie, a young boy River (Pop) defended and protected during their incarceration in Parchman in the 1940s. As they make their way back home, the ghost recounts his experiences to Jojo, who has heard part but not all the story of what happened to Pop when he was in prison. Richie, who managed to escape the prison, cannot remember what happened afterward and needs to know the end of his story from Pop so he can be laid to rest. The family stays the night at Al's again because Kayla is still sick. Leonie reconnects sexually with Michael. She is increasingly frustrated with her children, who look to each other, rather than her, for comfort. The family leaves in the morning with sandwiches and a baggie of meth from Al. Michael puts it in his pocket.

On the way back home, a policeman pulls over the family's car. Eager to avoid detection of the meth, Michael hands it to Leonie to hide it. She is unable to force it through the secret compartment in the car, so she swallows the whole bag despite the hole it. The policeman handcuffs her when she tells him they are headed home from the prison. He also moves to handcuff Jojo. Jojo becomes frightened and reaches for a gris-gris bag Pop slipped into his things before the start of the trip. The gesture frightens the officer, who pulls a gun on Jojo and kicks his feet from under him before cuffing him. Kayla jumps between the officer and her brother, and then she vomits on the officer. The officer finds nothing in the car and discovers the gris-gris bag is not a weapon. He lets the family go with a warning to go home.

They arrive home to find the house empty, so they go to the house of Michael's family after dropping off Misty. While Maggie, Michael's mother, attempts to welcome them, Big Joseph curses Leonie and gets into a fight with Michael after calling Leonie a racial slur. The family returns their home. Pop is there now, but Mam has taken a turn for the worse. Leonie goes in to talk to her mother, who asks her to help her gather items she needs to complete a litany to invoke Maman Brigitte, mother of the dead, her last hope for relief from her suffering. Leonie gathers the rocks and leaves them near her mother's altar in her room. Michael makes breakfast for the children but loses his temper and hits Kayla when she has a tantrum.

Meanwhile, Jojo makes a deal with Richie, whom he increasingly distrusts. Jojo will find out the end of Richie's story from Pop, and Richie will leave his family alone. Jojo asks Pop to tell him the end of his story of Parchman. Pop tells him that he killed Richie to prevent him from being lynched after he ran away from Parchman. When Richie overhears the story, he temporarily disappears. Full of revenge, Richie attempts to take Given's place when it is time for Mam to pass over into death. Leonie performs the litany, and with the combined efforts of the entire family (including the ghost of her brother), helps Mam have a peaceful passage into death, guided by Given.

Jojo is angry with Leonie for letting Mam go, despite Pop and Leonie's assurance that it was what Mam wanted. Leonie gets so angry that she slaps and hits Jojo until Pop stops her. She leaves to go get high with Michael. The two of them return to the house sporadically after that, completely abandoning their children.

Jojo is restless and angry after Mam dies, but he develops an even stronger ability to wordlessly communicate with his sister, who seems to have the family's supernatural ability to see the dead and communicate with thought. One day, Jojo discovers Richie, who has not been exorcised after all, in a live oak that is full of unquiet spirits of African Americans who died violently. He watches them on in to the night. When he returns, Kayla walks back out to the tree and sings a song that allows the ghosts to go home to their final rest.