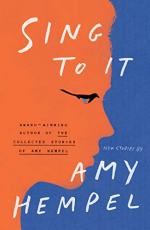 Sing To It Symbols & Objects

Amy Hempel
This Study Guide consists of approximately 57 pages of chapter summaries, quotes, character analysis, themes, and more - everything you need to sharpen your knowledge of Sing To It.

The concept of "metaphors" introduced in "Sing to It" highlights the emotional distance between the two characters as they try to navigate their intimacy. The man asks the woman to not use any metaphors, claiming that nothing is like anything else. The woman says a similar thing but they both break their requests, realizing that the morphing of language through a metaphor is able to provide their relationship with an almost ethereal element.

The dead winter lamb's coat in "The Orphan Lamb" symbolizes the brutal, primal personality of the man and the nature of his romance with the narrator. His telling of the farm story is specifically meant to create a mood filled with a naturalistic spirit, and this is how he attempts to intimate himself with the narrator.

The dolls in "The Doll Tornado" symbolize the raged of women who...

More summaries and resources for teaching or studying Sing To It.

Sing To It from BookRags. (c)2020 BookRags, Inc. All rights reserved.