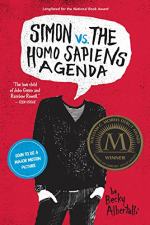 Albertalli, Becky
This Study Guide consists of approximately 60 pages of chapter summaries, quotes, character analysis, themes, and more - everything you need to sharpen your knowledge of Simon vs. the Homo Sapiens Agenda.

This detailed literature summary also contains Quotes and a Free Quiz on Simon vs. the Homo Sapiens Agenda by Albertalli, Becky .

The following version of this book was used to create this study guide: Albertalli, Becky. Simon vs. The Homo Sapiens Agenda. Balzer + Bray, an imprint of Harper Collins, 2015. First paperback edition, 2016. Narrated by protagonist Simon, the narrative alternates chapters of first person, present tense narration with chapters composed of emails between Simon and his beloved who, afraid of the consequences of his sexual orientation being known publicly, has given himself the pseudonym “Blue.”

As the novel begins, Simon learns that a classmate (Martin) accidentally saw some emails Simon had been sending to a young man at the same school (pseudo-named “Blue”) with whom Simon has been corresponding. He also learns that Martin will only keep quiet about what he saw (that is: that Simon is gay) if Simon helps him get together with popular new student Abby, with whom Simon has become close. Unsure about whether he is ready to come out of the closet, Simon agrees, but does not tell Blue what has happened. Instead, as Simon struggles with just how to fulfill his part of the bargain with Martin, he and Blue continue their increasingly intimate, increasingly longing email correspondence. Meanwhile, Simon continues to develop his friendship with Abby, as well as his increasingly complicated friendships with Nick (who is also attracted to Abby) and Leah (who is attracted to Nick).

As Simon becomes more and more into Blue and their relationship, he also becomes more and more determined to find out who Blue actually is. He carefully considers some of the hints that he has picked up from Blue’s emails, and jumps to the conclusion that Blue is Cal, who is working with Simon and the other students on the school musical. Simon also finds himself being drawn to attractive jocks Bram and Garrett, but feels guilty about his attractions (particularly to Bram) because he feels as though he is cheating on Blue.

The situation becomes increasingly complicated when Martin becomes jealous of Simon’s friendship with Abby instead of promoting opportunities for her spend time with Martin. As a result, Martin places an anonymously written ad on the high school notice board, purporting to be from Simon, announcing that he is gay, and using words like “blue.” As a result, Simon is forced to come out to his family before he is ready; he faces bullying at school; and fears that he is going to lose his relationship with Blue. He also starts asking Blue how he feels about revealing their identities to each other, but the nervous Blue wants to keep the secret – until, that is, he realizes who Simon really is, and then stops corresponding. Simon’s anger and hurt as a result of this is part of the reason he erupts in anger at Martin, who tries to apologize for outing him but who, instead, is on the receiving end of Simon’s pained frustration, in the aftermath of being forced to come out when he was not necessarily ready.

Simon continues to send emails, with no response – until, that is, Blue leaves him the gift of a t-shirt with the logo of Simon’s favorite band on the front. Simon is tempted to wear the t-shirt to school and see what the reaction is, but decides not to. Meanwhile, a trip into the city with Abby and Nick results in Simon inadvertently getting drunk and, when he gets home, being grounded by his parents, restricted from all outside activity except school and the performances of the musical. Simon feels he has nothing to lose, and sends an email to Blue offering to meet him at the closing night party for the musical, held at a local carnival.

The show goes on, in spite of some more incidents of homophobic bullying at the school. Simon hurries to get to where he had suggested that he and Blue meet, but is disappointed when no one makes contact. As the fair is closing down, however, he and Blue make contact, and Blue turns out to be Bram. The two of them decide together to go public with their relationship, and start spending time together in and out of school. The novel ends with Simon looking ahead to some kind of future with the man he is excited to call his “boyfriend.”

More summaries and resources for teaching or studying Simon vs. the Homo Sapiens Agenda.