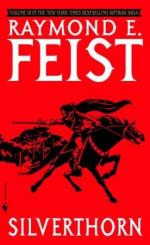 Raymond E. Feist
This Study Guide consists of approximately 55 pages of chapter summaries, quotes, character analysis, themes, and more - everything you need to sharpen your knowledge of Silverthorn.

This detailed literature summary also contains Topics for Discussion and a Free Quiz on Silverthorn by Raymond E. Feist.

Silverthorn, by Raymond E. Feist, is a classic quest story. A poisoned crossbow bolt strikes Prince Arutha's great love, Princess Anita, during their wedding. Anita is a victim of an assassination attempt on Arutha. She lies next to death and he undertakes a quest to find the antidote to the rare Silverthorn, the poison. He faces the "undead," who magically return to life and are determined to kill him. Silverthorn is a classic good versus evil science fiction novel about love and danger between two worlds.

Arutha and Anita plan to marry after being apart for a year. Princess Carline insists that Laurie, a troubadour, will marry her as well. Arutha and Laurie ride into Krondor, Arutha's capital city, narrowly missing an assassination attempt. Jimmy manages to avert the attempt on his life, and joins Arutha in the castle. Cast out of the thief's guild because he put Arutha's life ahead of his responsibilities to the guild, Jimmy becomes a squire in the service of Arutha. Jimmy and Laurie help to search out the assassin guild. They find the Nighthawks infiltrated by moredhel Black Slayers. Fire is the only method to kill these evil ones. They burn a brothel to kill the Slayers and Nighthawks.

At the wedding, Jimmy prevents the assassination of Arutha, but the poisoned bolt hits Anita. The captured assassin, filled with fear of the dark one, agrees to help if they can keep him out of the grips of this evil being. He reveals the poison is Silverthorn, and a priest of death helps him die. Arutha searches for the antidote, chased by Black Slayers. Fighting Slayers as they travel, the group faces magical beings, undead Slayers, and assassins. The abbot gives Arutha a talisman that prevents the Slayers from finding him. Laurie's friend and a Hadati Hillman who has made an oath to kill Murad join them.

At Stardock, Pug is building a school to teach magic. A seer sees a moredhel destroy cities. Then he sees the moredhel sit throne, set on a mound of bodies, with an evil being behind him. Pug's friends determine that the evil comes from Kelewar. Pug returns to Kelewar, creating a rift that will take him there. He finds that politics difficult, and the Warlord intends to take over the Empire. He gains support from two old friends, but the Warlord captures them. Pug learns to use a lesser magic, and frees himself in time to help in the battle against the Warlord's soldiers. The Emperor allows him to stay and search for information about the Enemy, the dark one.

Arutha's party arrives at Elvandar where the Elven Queen and her husband, Tomas, give them help. The moredhel are elves. Some have renounced mortality to kill for their master, Marmandamus, who seeks to kill Arutha as the Lord of the West. Silverthorn only grows next to the lake, Moraelin. Renegade moredhel and humans, led by Murad, guard Moraelin. They find a different route to the lake and search for Silverthorn. On the third night, they find Silverthorn in the lake.

They race back toward the elven forest, but the distance is great and Jimmy is hurt. One elf runs on for help while the rest make a stand Black Slayers. The Hadati kills Murad and cuts out his heart so he cannot return to life. As they are about to be overrun, the elves arrive and help the humans run back to the safety of their forest. There Tomas destroys all the Slayers in the band as they cross the stream into Elven land. Arutha returns to Krondor with the antidote, saving Anita.

Pug travels far to the north where there is only ice. There he finds the legendary watchers, who are Elves from his world, come to another world. They have created a forest city under the ice and have waited for Pug to arrive. He will stay a year for training and teaching so he can be strong enough to defeat the Enemy.