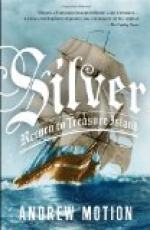 Andrew Motion
This Study Guide consists of approximately 19 pages of chapter summaries, quotes, character analysis, themes, and more - everything you need to sharpen your knowledge of Silver: Return to Treasure Island.

When the novel begins, Jim is working at his father's inn, the Hispaniola, on the coastline of England by the Thames River. He is a fairly well-educated teenager, who is slightly rebellious and loves the marshlands, but looks forward to something a little more exciting. The introduction of Natty Silver, daughter of Long John Silver and a freed slave from Barbados, gives him the adventure of a lifetime by coming to see Jim on her father's behalf. Long John Silver has hired a trustworthy crew and captain to bring Jim and Natty to the Caribbean, to Treasure Island, to bring back the massive horde of silver that was left behind. Jim secures the treasure map, and he and Natty, along with Captain Beamish and his crew and ship, set out to Treasure Island.

However, at Treasure Island, things go wrong quickly. Three marooned pirates from the original expedition have become the rulers of a small group of Europeans, and their marooned slaves, whom they rule with an iron fist. When Natty is captured by these pirates, Beamish determines that an attempt to save her life and liberate the slaves must be made. Sadly, Beamish is killed in the attempt. Natty simultaneously discovers the silver horde on the island with the White Rock. In a swashbuckling climax, the pirates are ultimately defeated and the silver is loaded onto the ship. Attempting to run off from a storm, the ship is run aground and many slaves and crew die. Natty and Jim, however, fortunately, escape to tell their story.

More summaries and resources for teaching or studying Silver: Return to Treasure Island.

Silver: Return to Treasure Island from Gale. ©2005-2006 Thomson Gale, a part of the Thomson Corporation. All rights reserved.