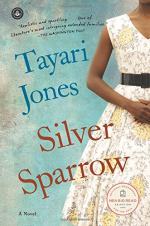 Jones, Tayari
This Study Guide consists of approximately 44 pages of chapter summaries, quotes, character analysis, themes, and more - everything you need to sharpen your knowledge of Silver Sparrow.

The following edition of this book was used to write this study guide: Jones, Tayari. Silver Sparrow. Algonquin Books, 2011.

The first half of Silver Sparrow is narrated by Dana Lynn Yarboro, a high school girl in Atlanta in the 1980’s. Dana is primarily raised by her mother, Gwendolyn, although her father, James will visit the family one night a week. Gwendolyn and Dana both know that they are effectively James’ “second” family. At the time James had married Gwendolyn, he was still married to another woman, named Laverne, and had a daughter the same age as Dana, named Chaurisse. Laverne and Chaurisse do not have any idea about the existence of Gwendolyn and Dana, or that James has a second family at all. Gwendolyn and Dana are not only aware of the arrangement, but, in Dana’s childhood, would periodically spy on Chaurisse on the playground of the neighboring elementary school. As Dana grows older and wishes to do certain things, such as an after-school science program, she is forbidden to do so by her parents if Chaurisse is already in the program.

When Dana is in high school, she is a skilled student, and spends most of her time either with her boyfriend, Marcus McCready III, or her friend Ronalda Harris, who is new to town, and also neighbors with Marcus. Both Gwendolyn and James disprove of Dana’s relationship with Marcus, but she continues to pursue him, even when he flagrantly gives gifts to another girl at Dana’s school. One day when Dana is at school, she is pulled out of class by Raleigh, James’ reserved adopted brother and lifelong best friend. Raleigh drives Dana to rural Ackland, where she is to meet Miss Bunny, James and Raleigh’s mother (and Dana’s grandmother), for the first time, as Miss Bunny is on her deathbed. The two women talk privately and openly about the bizarre family scenario, and quickly make a strong connection. When Miss Bunny passes away soon after, Raleigh wins a local photography contest for a stirring picture of Laverne and Chaurisse preparing for her funeral. When Gwendolyn sees a print of the picture hanging at the local mall, she steals it.

The second half of the novel is narrated by Chaurisse. Chaurisse begins by describing her family history: James had impregnated Laverne when they were only 14 years old, and had gotten married (with parental consent), followed by Laverne moving in with James, Raleigh, and Miss Bunny. Chaurisse had effectively grown up in Laverne’s hair salon, where she was able to constantly listen to patrons discussing their romantic issues with her mother. After Miss Bunny’s death, as her family is deeply depressed, Chaurisse attempts to steal makeup at the mall, and notices another girl doing it at the same time. However, noticing a security camera, both girls put the makeup back, thus coming off scot-free when the store’s manager investigates their purses. As the girls collect themselves outside, it is clear to the reader that the other girl is Dana. (Furthermore, it is clear that Dana recognizes Chaurisse’s identity as her half-sister, while Chaurisse believes Dana to be a perfect stranger.) The girls part ways, but shortly after, Dana comes in to the hair salon, where they get to know each other more.

James and Raleigh begin to plan an elaborate party for Laverne, celebrating her 20th anniversary owning and operating the salon. Laverne is overjoyed when, while watching TV one night, James, Raleigh, and Chaurisse show her the elaborate invitations they have designed for the occasion. One weekend, Dana and Chaurisse agree to drive together to a party being thrown by Marcus McCready out in the country. As Chaurisse drives, one of the tires on her car blows out, and she gingerly pulls over to a small gas station in the middle of nowhere. Without any services to fix the car, Chaurisse calls on James to come pick her up. Dana also calls on Gwendolyn to come pick her up. As James arrives, Dana locks herself in the gas station bathroom, and James -- pretending, in front of Chaurisse, that he does not know Dana -- awkwardly talks to her through the door before taking off with Chaurisse. Chaurisse, who is suspicious of the oddity of the situation, rolls out of the car as James slowly starts to pull away. At that moment, Gwendolyn arrives and purposefully blocks James’ car, and immediately begins berating him, as James clearly intended to leave Dana by herself at the gas station to try and hide his secret.

A few days later, Gwendolyn and Dana come into the Pink Fox Salon while Laverne and Chaurisse are working. Gwendolyn shows them the marriage certificate between her and James that they had gotten in Alabama, and Dana shows them a brooch that Miss Bunny had gifted her during their one conversation. After angrily ordering them to get out of her salon, Laverne spirals into a depression, changing the locks on her house and not allowing James to come back in. James meekly attempts to win her back by calling on the phone or knocking on the door. Chaurisse learns from Raleigh what Gwendolyn’s address was and goes over one afternoon to talk to her. Laverne, eventually wanting a return to normalcy above all else, not only agrees to take back James, but the gigantic party they had been planning is thrown as a marriage recommitment ceremony.

The novel’s brief epilogue is narrated by Dana. It is the year 2000, and she is in her early thirties, as has a daughter in kindergarten, named Flora. One day, when Dana is picking up Flora from school, she sees that Chaurisse has pulled into the school’s parking lot. The two half-sisters share an awkward conversation before going their separate ways. As Dana drives away, she pulls over into another parking lot and deeply hugs

More summaries and resources for teaching or studying Silver Sparrow.