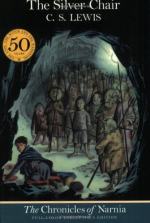 Overview
About the Author
Plot Summary
+Chapters Summary and Analysis
Chapter 1, Behind the Gym
Chapter 2, Jill is Given a Task
Chapter 3, The Sailing of the King
Chapter 4, A Parliament of Owls
Chapter 5, Puddleglum
Chapter 6, The Wild Wastelands of the North
Chapter 7, The Hill of the Strange Trenches
Chapter 8, The House of Harfang
Chapter 9, How They Discover Something Worth Knowing
Chapter 10, Travels Without the Sun
Chapter 11, In the Dark Castle
Chapter 12, The Queen of the Underland
Chapter 13, Underland without the Queen
Chapter 14, The Bottom of the World
Chapter 15, The Disappearance of Jill
Chapter 16, The Healing of Harms
Free Quiz
Characters
Objects/Places
Setting
Social Sensitivity
Literary Qualities
Themes
Themes/Characters
Style
Quotes
Adaptations
Topics for Discussion
Essay Topics
Ideas for Reports and Papers
Further Study
Copyright Information
Order our The Silver Chair Study Guide

C. S. Lewis
This Study Guide consists of approximately 59 pages of chapter summaries, quotes, character analysis, themes, and more - everything you need to sharpen your knowledge of The Silver Chair.

This detailed literature summary also contains Further Study and a Free Quiz on The Silver Chair by C. S. Lewis.

The Silver Chair completes the Caspian trilogy within "The Chronicles of Narnia," begun with Prince Caspian and continued in The Voyage of the "Dawn Treader." In The Silver Chair, Caspian is old and in failing health, soon to die. More than ten years earlier his wife, the daughter of the retired star Ramandu, was killed by a serpent and then his son Rilian disappeared, apparently kidnapped by a mysterious, magical woman dressed in green. Many of Narnia's greatest heroes have set out in search of the prince, but have never returned, so Caspian eventually decreed that no one shall search for his son, in order to prevent the loss of more good Narnians. Having heard that Asian has been seen in the Lone Islands, Caspian himself prepares for one last voyage in the hope that Asian will find Rilian.

In the meantime, Jill Pole has her own problems at a school named Experiment House. It is the latest in progressive education in which the staff takes care that bullies and thugs don't have their psyches damaged by any kind of discipline. Indeed, the beating up of children seems to be encouraged by the faculty. When Jill hides from a gang that wants to beat her up, she is unexpectedly helped by Eustace Scrubb. This is unexpected because Eustace had once been a monster, cruel and vicious, but he has changed into a more compassionate person. At his urging, Jill and he call to Asian and are transported to another world.

More summaries and resources for teaching or studying The Silver Chair.