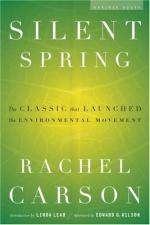 Carson's survey of the research on pesticides opens in a most unscientific fashion with a tale about an American town that has suffered a series of plagues. At chapter's end, Carson acknowledges that the town is an imaginary one, but lest the tale be dismissed as mere fantasy, she hastens to add that each of the catastrophes it catalogs "has actually happened somewhere, and many real communities have already suffered a substantial number of them."

Not until chapter two does Carson identify the source of the ills described in chapter one: potent synthetic poisons of relatively recent design, proliferating at the rate of about five hundred a year, applied in massive quantities virtually everywhere, with disastrous short- and long-term consequences for both wildlife and humans. To convey the grave danger that these substances represent, she introduces an analogy that will resurface over...