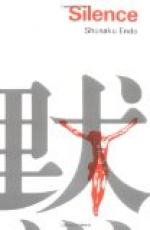 Shusaku Endo
This Study Guide consists of approximately 36 pages of chapter summaries, quotes, character analysis, themes, and more - everything you need to sharpen your knowledge of Silence.

Nagasaki is the seat of power for the persecutors where captured priests and brothers are brought to be cross-examined and tortured. Ferreira is said to have apostatized here and no one has heard of him since. It does turn out that the priest did renounce his faith but rather than being set free he lives as a type of servant in Inoue's employ. Inoue lives here. Rodrigues is eventually brought to Nagasaki for questioning before Inoue. He also is given the opportunity to speak with Ferreira and to finally learn the truth about his former teacher.

This Chinese harbor is where the three Portuguese priests land after leaving Portugal. The city stands at the mouth of the Chu-Kiang River, located on one of the many islands surrounding the bay. The city is large and spreads without distinct boundaries. Here they meet with Valignano, who tells them...

More summaries and resources for teaching or studying Silence.