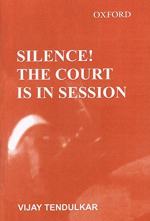 Silence! The Court Is in Session Summary & Study Guide

Priya Adarkar Vijay Tendulkar
This Study Guide consists of approximately 69 pages of chapter summaries, quotes, character analysis, themes, and more - everything you need to sharpen your knowledge of Silence! The Court Is in Session.

Silence! The Court Is in Session Summary & Study Guide Description

Silence! The Court Is in Session Summary & Study Guide includes comprehensive information and analysis to help you understand the book. This study guide contains the following sections:

This detailed literature summary also contains Quotes and a Free Quiz on Silence! The Court Is in Session by Priya Adarkar Vijay Tendulkar.

The following version of this book was used to create this study guide: Tendulkar, Vijay, translation by Priya Adarkar. Silence! The Court is in Session. Oxford University Press. New Delhi, India. Oxford India Paperbacks Collection, Sixth Impression, 2009. The play is structured in three acts, but despite there being two intermissions, the action is continuous – that is, the second and third acts resume the action at exactly the moment when the previous act ended.

The play begins with a young schoolteacher, Miss Benare, being shown into the room where she and the rest of her group of amateur actors are to gather. Her conversation with the man who seems to be the caretaker, Samant, is flirtatious, but Samant is too uncomfortable to respond with anything but awkward movement away from her.

Soon, other members of the troupe arrive. First, there is the lawyer Sukhatme, bossy and insensitive. Then there is the scientist Ponkshe, young and very full of himself. Finally, there is the shy and awkward student Rokde. The three of them engage in mocking banter with each other, and with Miss Benare. The actor Karnik, who likes to try and impress the others with his knowledge and experience, is next. Finally, Mr. and Mrs. Kashikar appear, the former self-important and pretentious, the latter also pretentious but also frequently talked down to by her husband.

After the Kashikars arrive, the troupe discovers that at least one of their members, Professor Damle, is going to be missing. The members of the troupe realize they need a replacement, and decide on the reluctant Samant. They then decide to stage a mock trial so he can learn a bit about what he is supposed to do. When Miss Benare is out of the room for a moment, the members of the troupe have a whispered conversation that the audience does not hear, and decide to put Miss Benare on trial. When she comes back, she is asked how she pleads to the charge of infanticide – that is, the killing of a child. She does not respond. End of Act One.

Act Two begins at the same moment, as Miss Benare faces this unexpected charge. She tries to resist the plan to enact a trial, but the others overwhelm her. Sukhatme takes on the roles of prosecution and defense attorney, while Kashikar becomes the judge, Rokde becomes a bailiff, and Ponkshe takes notes. As the trial begins, there are increasingly absurd arguments about procedure, with both Sukhatme and Kashikar seeming to be more interested in either personal hygiene and / or chewing tobacco. Eventually, the trial gets underway. At first the questions seem to be foolish and uneducated, but after a while they start to become more pointed and more serious. The character of the free-spirited Miss Benare is called into question, and she is accused not only of having an affair with professor Damle, but of being pregnant with his child. As the accusations of the “court” become increasingly angry and judgmental, Miss Benare attempts to leave, but finds that the door is locked. She is then asked to speak as a witness in her own defense. End of Act Two.

Act Three begins at the same moment, as Miss Benare takes the witness stand. Under Sukhatme’s questioning and Kashikar’s insistence that she speak, Miss Benare remains silent. Other witnesses take her place, continuing to accuse her of immorality and of endangering the well-being of society. Eventually, she is found guilty. Kashikar gives her ten seconds to speak in her own defense. At that moment, there is a change in the onstage light, sound, and atmosphere. Miss Benare speaks at length about her struggles with mental health, her longings for love, and her determination to be a good mother to her child. His existence, she says, is the only reason she wants to stay alive. After she finishes, there is a shift back into the reality of the courtroom. The ten seconds has passed, and Kashikar sentences her to have the baby taken from her body. She collapses.

At that moment, audience members for that evening’s performance begin to arrive. The members of the troupe bring themselves back to reality, and start to prepare for that performance. The exception is Miss Benare, who remains collapsed on the floor. Samant offers her some comfort, but she does not seem able to take it. The play ends with Miss Benare still crumpled on the floor, alone.

More summaries and resources for teaching or studying Silence! The Court Is in Session.

Silence! The Court Is in Session from BookRags. (c)2022 BookRags, Inc. All rights reserved.