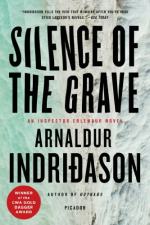 Arnaldur Indridason
This Study Guide consists of approximately 47 pages of chapter summaries, quotes, character analysis, themes, and more - everything you need to sharpen your knowledge of Silence of the Grave.

Silence of the Grave Summary & Study Guide includes comprehensive information and analysis to help you understand the book. This study guide contains the following sections:

This detailed literature summary also contains Quotes and a Free Quiz on Silence of the Grave by Arnaldur Indridason.

Erlendur and his team are called in after a child finds some bones in a construction site. They call in a few people from various fields to help date the skeleton. While at the site, Erlendur trips over what appears to be an outstretched skeletal hand. Erlendur then receives a call asking him for help. He recognizes the voice as his pregnant daughter, Eva Lind, and begins rushing throughout the city to find her. His search ends when he finds her unconscious and bleeding.

Erlendur returns to work and is brought up to date by the rest of his team. He then returns home to sleep and is awoken by a call from Elínborg telling him that she found information about the house by the redcurrant bushes. It was owned by a man named Benjamín Knudson.

Erlendur finds Benjamín’s niece, a woman named Elsa, and asks her about her uncle. She tells him that her uncle’s fiancée broke off their engagement and is believed to have committed suicide soon after. She gives Erlendur and his team full access to her cellar where she keeps all of her uncle’s belongings.

Meanwhile, Elínborg and Sigurdur Óli visit an elderly man named Róbert Sigurdsson who had lived near the dig site when the body was believed to have been buried. He is currently in poor condition in a hospital. After a great deal of patience, Róbert is able to convey to Elínborg that they need to look for a crooked woman in a green coat.

The group decides that they are looking for an old missing persons case and that they should procure some DNA from Sólveig for tests.

Erlendur heads to the British embassy to see if they have any information on the base that was there. He learns that there had been a base and that it had been handed over to the Americans soon after it was built.

Erlendur and Elínborg go to visit a man named Höskuldur Thórainsson where they learn that the owner of the tenant may have abused his wife.

Elínborg goes to visit the sister of Benjamín’s fiancée, a woman by the name of Bára. Bára reveals that her father committed suicide soon after his daughter’s death.

Sigurdur Óli continues to search through Elsa’s cellar to try and find clues about the buried body. During one of his breaks he begins talking to Elsa about the state of his relationship. She also gives him Róbert’s locket which contains a lock of Sólveig’s hair. She says that Sólveig was pregnant with another man’s child and that her father killed himself before Sólveig died.

Erlendur meets with a man named Ed who had worked with the American military police. Ed says that the man who had lived in the house with his kids had been smuggling American goods from the base into Iceland for money, though he cannot remember the man’s name. Ed adds that that the man was an abusive husband.

Elínborg returns to Bára’s home demanding that she tells her the truth. Bára confesses that she did lie and that her sister had been raped by their cousin.

Skarphédinn, the archeologist in charge of the dig, calls Erlendur at home to tell him about the state of the dig. He also says that there is a lame woman in a green coat near the site. Erlendur rushes over to find her and learns that she is the child of the family that lived in Benjamín’s house. Her name is Mikkelína, and she begins to tell Erlendur about her family.

Throughout the book, flashbacks occur giving information about Mikkelína’s family. Her father, Grímur, abused her and her mother for years until he was caught by the Americans for smuggling goods into Iceland. He is sent to prison and her mother, Margrét, falls in love with an American soldier named Dave. However, Dave has to leave Iceland and Grímur returns home. The abuse continues and the family learns that Margrét is pregnant with Dave’s baby. In order to protect the baby, Margrét has begun to poison Grímur. Grímur learns of this as the baby is being born and tries to kill her and her baby. In the scuffle, one of Mikkelína’s half-brothers, Símon, kills his father. They then burry him and the dead infant in the ground where they are now digging.

Mikkelína tells Erlendur and Ellínborg this story over a few days and invites them to meet Símon. He suffers from a mental disorder where he does not mentally age and stays at a nursing home.

More summaries and resources for teaching or studying Silence of the Grave.

Silence of the Grave from BookRags. (c)2022 BookRags, Inc. All rights reserved.