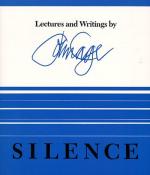 This detailed literature summary also contains Topics for Discussion and a Free Quiz on Silence; Lectures and Writings by John Cage.

This collection of essays and presentations by noted composer and musical innovator John Cage attempts to capture on paper both the intellectual and stylistic creativity with which he approached his work. In both the themes of the collection and the internal arrangement of the individual pieces, the author explores the nature of music, music's relationship to sound, and the value of incorporating randomness into what had previously been an ordered, carefully considered art form.

After a brief forward, in which he introduces the basic principles that formed both his theories and the writings (in this collection) that developed from them, the author's first few essays discuss the practical manifestations of those principles—specifically, how they influenced the creation and performance of new and/or experimental music. Two further essays examine how both principle and practice were applied to the creation of three specific compositions, with introductory notes to all the essays (here and throughout the collection) relating the specific circumstances and/or techniques that went into their creation.

The author then examines the development of modern/experimental music, both its theory and its applications in America, and offers brief, semi-biographical sketches of two of its earliest proponents. He then, in four essays, explores the ongoing development of the symbiotic, mutually beneficial relationship between modern music and modern dance, suggesting that the experience of each was expanded by the influence and incorporation of elements of the other. Finally, he also explores the parallels between these music/dance experiments (not to mention the intention behind them) and similar experiments and intentions manifesting in the world of visual art.

Two lengthy presentations in the middle of the collection expand upon the Buddhist theory at the heart of the author's theories and practical work. This theory, simply stated, suggests that while values are based on expectations and judgment, an experience's actual worth ought to be based on what it is, not on what an individual thinks it should be.

Two further, and equally lengthy, lectures juxtapose experimental form with philosophical content. The first, written to be presented in a tightly proscribed period of time, expands upon the author's theories about the relationship (tension?) between randomness and structure, and upon the idea that composition (and by extension art in general) ought to be interpreted as a representation of existence rather than an explanation of it. This essay is a reiteration of his often repeated assertion that there is no such thing as silence (something, he suggests, is always making a sound). In the next essay, he again uses intricately calculated form and content to reinforce his idea that meaning in life is hard to come by, but is possible to achieve in glimpses.

The book concludes with a collection of anecdotes, humorous but illuminating in tone and similar in both tone and content to the anecdotes appearing throughout the book, that further proves his central point that relationships between experiences may not always be apparent, but are always present.

Throughout the book, the author presents anecdotes of his personal experience exploring the book's central themes. While he leaves understanding of the relationship between anecdote and theme up to the reader, there is the clear sense throughout that in structuring the book in this way, he is offering the reader an opportunity to understand the relationship between theory and practice—specifically, the parallels between theory, practice and the experience of existence.