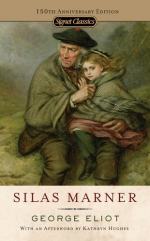 George Eliot
This Study Guide consists of approximately 31 pages of chapter summaries, quotes, character analysis, themes, and more - everything you need to sharpen your knowledge of Silas Marner.

Dunstan Cass is Godfrey's younger brother. He is a disreputable, dishonest, spiteful young man who uses his knowledge of Godfrey's secret marriage to blackmail him. Godfrey agrees to let Dunsey sell Godfrey's horse, Wildfire, to raise money, but Dunsey rides the horse foolishly and is responsible for the horse's death. As he walks home, Dunsey robs Marner of his gold and then disappears. No one is concerned by his absence, since he has left home for long periods before. His remains are discovered sixteen years later in a stone-pit that has gone dry. It is concluded that he drowned.

Godfrey Cass is the eldest son of Squire Cass and heir to the estate. He is a good-natured man, but he lacks strength of character and does not like to face up to difficult situations. In a fit of drunkenness he made the mistake of marrying beneath his station, and he has kept his wife and child a secret. He lives in fear that his ill-willed younger brother Dunsey will tell their father about his secret, which would probably result in his being turned out of the family home and cut off from his inheritance. He is also bitterly frustrated by the fact that because he is already married, he cannot marry the girl of his choice, Nancy Lammeter. When his wife dies and Dunsey disappears, Godfrey's worries appear to be over, and he duly marries Nancy. But he is tormented by the fact that his unacknowledged daughter Eppie is being raised by Marner. He shows as much care and concern for her as he can without arousing suspicion, and he tries to persuade Nancy that they should adopt Eppie. But Nancy refuses. After Dunsey's remains are found, Godfrey tells Nancy everything about his past. They try to adopt Eppie, but she refuses to be parted from the man she regards as her father. Godfrey is forced to accept that he can never publicly acknowledge Eppie as his daughter, a blow for which his happy marriage is only partial consolation.

Molly Cass is Godfrey Cass's first wife, whom he married secretly. She comes from a lower social class than her husband, and she is addicted to opium. She decides to walk to the Red House on New Year's Eve to betray Godfrey's secret, but she collapses and dies near Marner's cottage.

Squire Cass, the father of Dunsey and Godfrey, is the most prominent landowner in Raveloe. A widower of sixty, he is a bluff, robust, quick-tempered man who never questions the superiority of his own family within the parish. He is a difficult man to deal with. He is indulgent with his tenants for a while and lets them get into arrears, but then when he gets short of money, he comes down on them hard for rent. Once he has made up his mind about something, he does not alter it.

William Dane is a treacherous friend of Silas. When they are both young men, they are devout members of a religious sect that meets at Lantern Yard in a town in northern England. But Dane steals money from the church and deliberately arranges for Marner to take the blame. He then marries the girl to whom Marner had been engaged.

Eppie is the daughter of Godfrey and Molly Cass. Since Godfrey will not acknowledge his marriage, it is left to Molly to raise the child. But she is unfit to do so, and when she dies of an overdose of opium, the child is adopted by Marner. He christens her Eppie. Eppie grows up in a loving home and regards Marner as her father. She is pretty, with golden curly hair. She is content with her position in life and has no interest in being adopted by Godfrey and Nancy, even when she is informed that Godfrey is her real father. She remains utterly loyal and devoted to Marner and is happy to be associated with the poor, working people of the village. When she is eighteen, Eppie marries Aaron, and they live together in Marner's cottage.

Mr. Kimble is the village farrier (veterinarian), and he also serves as the town doctor. Because of his status he has a rather high opinion of himself. It is Kimble who takes charge of the situation in the Rainbow tavern after Marner tells the people he has been robbed.

Nancy Lammeter is the attractive young woman courted by Godfrey Cass. Nancy is well mannered, sincere, and always neat; at the New Year's Eve dance she is perfectly attired, with not a hair out of place. Although Nancy is a woman of good character, she also lives by some rigid, simple ideas, which she refuses to alter. She insists that her sister Priscilla dress in exactly the same way as she does, even though this does not set Priscilla off to best advantage. Nancy also refuses to adopt Eppie, even though Godfrey her husband greatly desires it, because she believes that Providence has decreed she remain childless. In Nancy's inflexible mind, adopting a child would be wrong, and the child would not turn out well. In spite of this fault, however, Nancy is a good, tender wife to Godfrey, and after he finally confesses his past indiscretions she agrees to try to adopt Eppie.

Priscilla Lammeter is Nancy Lammeter's sister. Five years older than Nancy, she is not as pretty as her sister and describes herself as ugly. But she does not seem to mind this disadvantage. She is a cheerful woman, full of common sense, and she has no wish to marry.

Mr. Macey is the old tailor and parish clerk of Raveloe. He often tells stories about village history in the Rainbow, and the men listen to him with respect.

Silas Marner is a weaver. As a young man living in a town in northern England, he is a member of a fundamentalist Christian sect that meets at a place called Lantern Yard. He is highly thought of by the other members of the sect, and the fact that during prayer meetings he sometimes goes into trances that last as long as an hour is seen as a sign of some special spiritual gift. But Marner is driven away from the town after his treacherous friend, William Dane, ensures that Marner is falsely convicted of theft. Marner settles in Raveloe, but his faith is shattered, and he isolates himself from the community. The villagers regard him with suspicion, which is not helped by the fact that Marner has knowledge of the healing properties of herbs. The superstitious villagers think this kind of knowledge may have something to do with the devil. Marner does not attend church and knows nothing of the village's church calendar because it is very different from the sect of Christianity practiced in Lantern Yard. The only thing he loves is his money. He earns a good income as a weaver, working alone in his cottage, and he hoards his gold, counting it lovingly. When the gold is stolen he is shattered. He seeks help from the villagers, and they begin to think more kindly of him. Marner's life changes completely when a child whose mother lies dead in the snow near his home finds her way to his cottage. He insists on raising her himself. The child, christened Eppie, brings out Marner's latent kindness and gentleness. Through Eppie he realizes that love is more valuable than money. He is then able to connect with the life of the community, and he becomes a respected and honored citizen of Raveloe.

Mr. Tookey is the deputy parish clerk and is unpopular with the other men.

Aaron Winthrop is the son of Dolly Winthrop. He is a steady, good-hearted young man, and he marries Eppie while promising also to take care of Marner.

Dolly Winthrop is the mother of Aaron and the wife of Ben, the village wheelwright. She is a mild, patient, hard-working woman who is always ready to look after the sick and the dying. She is one of the first of the villagers to take pity on Marner after his gold has been stolen, visiting him with her young son and bringing lard-cakes. Dolly supports Marner's decision to adopt Eppie, and she is full of valuable advice and practical help about how to raise the child.

Silas Marner from Gale. ©2005-2006 Thomson Gale, a part of the Thomson Corporation. All rights reserved.