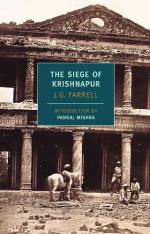 J. G. Farrell
This Study Guide consists of approximately 80 pages of chapter summaries, quotes, character analysis, themes, and more - everything you need to sharpen your knowledge of The Siege of Krishnapur.

The Siege of Krishnapur Summary & Study Guide includes comprehensive information and analysis to help you understand the book. This study guide contains the following sections:

This detailed literature summary also contains Topics for Discussion and a Free Quiz on The Siege of Krishnapur by J. G. Farrell.

The novel begins in the weeks just prior to the uprising and massacre at Captainganj and the siege of the British community of Krishnapur. It is 1857, and British rule in India is coming under attack because of the use of Ensign rifles that go against religious beliefs. In Calcutta, life goes on as usual, with various amusements for members of the upper class. George Fleury and his sister arrive from England, and they socialize with the Dunstaple family and with Mr. Hopkins, the Collector, whose wife is returning to England. The group picnics and meets officers from the Captainganj, and Fleury meets his competition for Louise Dunstaple's attentions, Lieutenant Stapleton.

When chapatis (a type of flat, round bread) begin to mysteriously arrive around the soldier's camp, or cantonment, in Krishnapur, the Collector is the only one to sense trouble brewing. He has mud ramparts erected and goes to Calcutta to warn other officials of the impending danger. His warnings are ignored, and not long afterwards there is a brutal rebellion at Captainganj which leaves many British soldiers dead. All of the soldiers, the British citizens and the Eurasians take shelter in the Residency area. Fortifications are erected and the small group defends itself against a series of attacks by sepoy, the Indian natives who were employed by Britain as soldiers.

As the siege progresses, various moral and practical tensions arise. Native Christians are not allowed to enter the compound in an effort to save food supplies, and there is debate over the allocation of food and the burial of bodies. Conditions deteriorate as the siege progresses, and faith in religion and "cultured" society is put to the test. The Padre becomes convinced that Fleury needs to renounce his sins, and the priest becomes increasingly fervent in his lectures and in his discussions with the Collector. Fleury and Louise become closer as the siege progresses, as do Harry and the "fallen girl," Lucy Hughes. During one of her tea parties, a swarm of chockchafer insects lands on Lucy, and the two young men scrape the bugs off her naked body. The Collector becomes ill, and he fights a vicious fever as a final retreat is made into smaller and more secure fortifications. Hari and the Prime Minister are kept unofficially as hostages in the hopes of diminishing the enemy attacks, though the Collector eventually lets the men go.

As cholera attacks the community, Dr. Dunstaple becomes obsessed with Dr. McNab's incompetency, and in an attempt at winning an ongoing public argument, Dr. Dunstaple drinks a lethal vial of rice water. a liquid from a cholera victim. Near the beginning of September the group becomes desperate, and hunger and despair set in. Social customs are almost entirely ignored, and an auction is attempted, where Rayne is shown up for his unethical bidding and an unequal distribution of the now depleted food stores.

Throughout the siege, the enemy attacks many times and the defending community members survive by luck or various military tactics. Eventually, a large attack occurs, and the British retreat to their final stand, the banqueting hall. Every possible object is used as ammunition-from stones to statue heads-and a relieving army finally arrives to save the besieged group. Fleury and the Collector meet many years later in Pall Mall as they go about their business in London. The Collector's attitudes about culture and progress have been drastically changed by his time in Krishnapur.

More summaries and resources for teaching or studying The Siege of Krishnapur.

The Siege of Krishnapur from BookRags. (c)2022 BookRags, Inc. All rights reserved.